His fingers arched and suddenly shards of sharp metal spat straight at her, shards made not of true metal but of Charter marks, conjured so swiftly that he must have already had most of the spell put together and hidden on his person, awaiting only a single mark to activate it.
Clariel reacted instantly, ducking under her shards, but even so she felt the heat of their passage above her head.
‘What are you doing?’ squeaked Clariel…
‘Use the Charter,’ bellowed Kagrin, his eyes intent on her own. ‘Defend yourself!’

Clariel doesn’t want to be in the city of Belisaere. All her life she has lived close to the forest, and that is where she feels called to be. But her parents have other plans for her – and so, it seems, do many others. Clariel’s mother has been invited to join the High Guild of Goldsmiths, the main reason for moving to Belisaere. Clariel is a granddaughter to the Abhorsen – though they’ve never met because of an estrangement – and is also related to the King. Her parents want her to marry the Guildmaster’s son; the Guildmaster, too, wants this – because he can then overthrow the King and install her as Queen. Her few allies also find her bloodlines useful, meaning even they can not be completely trusted. All Clariel wants is to escape the city and return to the forest – but that is going to be nearly impossible.

Clariel marks a much awaited return to the Old Kingdom for lovers of the series. Set 600 years before Sabriel, this prequel is set in a world which will be familiar to fans, and which will intrigue new readers. Clariel is a strong female lead, with an interesting mix of skills and problems, most notably her ability to connect to free magic and the fact that she is a berserk, prone to deep rages which give her great strength, but are difficult to harness.

With extras including maps of the Old Kingdom and of Belisaere, a sample of Sabriel and an essay on Free Magic, from the Library of Clayr, fans will be satisfied after their long wait – and many new fans will be hooked. 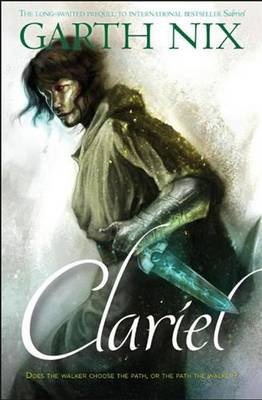 Available from good bookstores or online. Buying through this link supports Aussiereviews.