This hardcover picture book offering brings to life the lyrics of the popular song Santa Claus is Coming to Town. Featuring animal characters – a lion, a rabbit, a giraffe, a bear an a monkey – as they prepare for Christmas, and spread the news that Santa is coming by train, plane, by drum and more – this celebratory offering is accompanied by a CD recording sung by Human Nature.

Youngsters will enjoy seeing a song they are likely to be familiar with brought to life and to interpret the subplots of the illustrations as the characters exchange gifts, play tricks, argue and celebrate. My dad is big and tall
gentle and fun.
My dad is a giraffe!

When your dad is a giraffe, you can climb up his legs, slide down his neck and ride on his back. He can see a long way, and do amazing things. In My Dad is a Giraffe, Dad is depicted as a giraffe, with the human child loving what Dad can do – and the opening and closing illustrations cleverly showing that Dad is not really a giraffe, but that his imaginative child sees his height and cleverness as giraffe-like.

The text is simple, and a perfect complement to the whimsical illustrations which show what a giraffe-dad can get up to, as well as showing Mum as a zebra. Youngsters will love exploring the detail of these illustrations, as well as the message of love and connection between the father and child.

Filled with the gentle, imaginative fun that Stephen Michael King is known for, My Dad is a Giraffe is wonderful.

Bella is the only one who notices that her house is doing strange things. Her mum and dad, caught up in their busy lives, think she’s dreaming when she says that the house has moved. But soon the house starts moving further and further from their yard, and even Bella’s parents are forced to take notice when they wake up next to a pond. But it is Bella who figures out why the house is moving, and what they can do to help it.

Bella and the Wandering House is a whimsical tale of a wandering house, imagination and memories. The gentle mystery of why the house wanders – and what can be done about it – is resolved agianst the background of a lovely relationship between Bella and her grandfather. Bella is an independent, strong character, and and the change in her parents as the story proceeds is satisfying. When a sudden storm hits, the animals of the farm are taken by surprise. Far from shelter, they are not sure what to do – but Madge the Cow is very calm, and very brave and she offers shelter – first to Lally the rabbit, then to Robinson the dog, Cackalina the chicken and her excited chicks and, finally, to Spike the echidna. As lightning flashes and thunder booms, Madge not only provides a hiding place for the smaller animals, she also encourages them to sing, to dsitract them from the storm.

Underneath a Cow is a quietly humorous story about friendship, safety and bravery. Madge is a gorgeous yellow cow who smiles her way through the terrible storm, seemingly happy to be a point of refuge for her diverse range of guests (though she does request that Spike be careful of her ‘dangly bits’). The other animals appreciate her care, and are grateful and even form unlikely friendships through their experience.

Young readers will love the silliness of the story and its warm demonstration of friendship, and the humour of the illustrations, rendered in mixed media inluding watercolour, pencil and digital collage.

Papa was strolling towards the exit and as I turned to follow him, I saw her. In the cloud of smoke and steam left by the departing train, she appeared ghostly and indistinct, but as she moved towards us every detail sharpened. The grey dress, the modish hat, the beautiful face with deep brown eyes. My heart began to thump wildly. She was following me. It had been her all along, in the train, in Collins Street, in the Book Bazaar, perhaps even on the St Kilda Esplanade. Who was she? Why was she shadowing me? Did I have the courage to confront her?
But in a flash I relaised that I didn’t want to. Papa must not see her. This woman looked so much like Mama. It would only upset him.

Verity is happy with her Papa, and their ever-growing circle of friends. But a strange lady is following her – a woman who claims to be a relative, even though that seems impossible. When Verity and her friends go to the country for a holiday, it seems she can forget about the stranger for a while, and relax. But strange things are happening, and when Verity’s friend, Druscilla, and Helen, the wife of their host, are kidnapped, the holiday comes to an end.

A ransom note warns that police must not be involved, so the family’s friend, SP, investigates. Verity tries to help, but her visions, which seem to be offering clues, are confusing. Why was a red glove left at the scene of the kidnapping, and why do her visions also link to the colour red? And does the disappearance have something to do with the strange lady who was following Verity?

Verity Sparks and the Scarlet Hand is the third book featuring this fiesty heorine. Verity is part-detective, part mystic, with her visionary skills proving useful, though she struggles to understand or harness them. Set in 1880, in colonial Victoria, and featuring a wide range of characters from around the globe, the story will engage strong readers with a love of mystery and of historical fiction. ‘Right there and then I made up my mind that if ever I got the chance, I would do everything in my power to hurt them, to damage the Nazis and everything they stood for.

After a difficult childhood in Australia, Nancy Wake manages to travel first to London and later to Paris, where she talks herself into a job as a foreign correspondent. She is happy in Paris, and meets and marries a man she loves, but as the Nazi Party’s influence grows, she worries about what will happen, and when war breaks out, her fears are realised. Soon, Nancy is part of the resitance movenent, working to undermine the Nazis and to help their victims.

The White Mouse tells the remarkable story of a remarkable Australian woman and her work during World War 2: driving ambulances, helping escaped prisoners, transporting radios and other banned items. As a story which most Australian children are unlikely to know, and one which shows a strong woman working hard to make a difference in a time of hardship, the book is a really important offering.

The illustrations – in pen and ink and using techniques such as newspaper headlines and maps in the backgrounds of some pages, and text boxes looking as if they are taken from aging notebooks – have the feel of the time period in which they are set, and are reminiscent of the war story comics and paperback novels which adult readers may remember.

A quality book about a fascinating Australian. 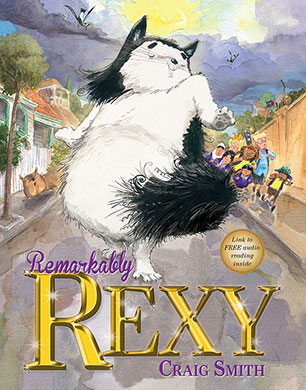 He’s been the most dazzling cat on Serengeti Street for years and years. He’s majestic, proud, maybe brave as well.

Rex is a very handsome cat, and everybody loves him. Every morning he grooms himself, and warms up ready for the kids on their way to school to stop and admire him. All is well with the world – until Pretty Pamela, the perfect siamese from down the street, prances into view just as the kids arrive, and steals the attention. As Rex pretends he doesn’t care, pandemominum breaks loose, when Towser the dog escapes, a magpie family gets cranky, and Rex ends up in a muddy puddle. Will the kids love him anyway?

Remarkably Rexy is a humorous tale of cats and their self-obsession. Rexy is likeable, though very vain, and his misadventures will delight young readers, as will the other animal characters – Pamela, Towser the dog, and the Magpie family.

Illustrator Craig Smith is well known for his warm, rich and often humorous illustrations, but in Remarkably Rexy he makes his debut as author, too.

Remarkably Rexy will be loved, just as he deserves.

How does sound taste?
Do colours smell?
Why do onions make me cry?
Who builds the wings for birds to fly?

Children love to ask questions – even (or sometimes, it seems, especially) questions which can’t be answered, so they will love Can a Skeleton Have an X-Ray? which is filled with questions. From practical questions (Why do onions make me cry?)  to whimsical questions (Can a skeleton have an x-ray?) to deep, even philosophical questions (How does the future look?) there are questions to ponder, discuss and even laugh about.

Hughes-Odgers’ quirky illustrations will delight readers of all ages. In black ink with watercolour, each illustration uses cross-hatching and detailed line work with earthy colour tones, to bing to life imaginative scenes which will inspire as much discussion as the questions themselves.

A visual feast,Can a Skeleton Have an X-Ray? is a unique, inspirational book for children and adults.