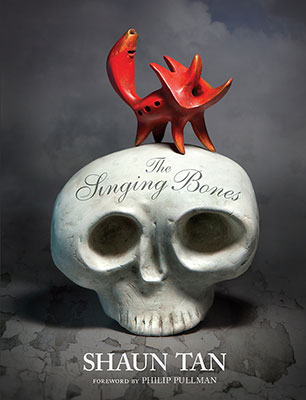 ’These little figures of slay, with their simplified features, their single attributes, are perfect realisations of the strangeness of the characters they represent.’ PHILLIP PULLMAN

If you are expecting smiling princesses or Disneyfied beasts in this collection of images interpreting Grimms’ fairytales, then you are probably unfamiliar with the work of its creator Shaun Tan. But if you love Tan’s work, then you will adore this amazing offering.

Tan created sculpture images to accompany a collection of Grimms’ fairy tales edited by Phillip Pullman, and The Singing Bones presents these images plus more, each accompanied by a short extract from the relevant fairytale. The sculptures, created with paper-mache and clay and coloured with acrylics, oxidised metal powder, wax and shoe-polish and could well be the relics from an archaeological dig, an effect Tan was hoping to create. Some are whimsical, others are frightening, but all are breathtaking. Readers who may be unfamiliar with the tales will probably be keen to go and find them for themselves, but in the meantime , a back-of-book index gives a precis of each tale.

A wonderful collectors’ item suitable for all ages.

So there was a girl. Young but not too young. A face as unformed as an egg, so that one could not tell if she would turn out to be fair or astonishingly ugly. She was to be sent to a city in another land by a mother and father in the midst of a divorce. The one thing they could agree upon was that the girl should not be exposed to the violence they meant to commit on their life. There was a quality in her that made it impossible to do the ravening that the end of love required.

Nobody who has read any of Isobelle Camody’s work can doubt her ability as a story teller, and this new collection of six stories serves only to cement that certainty. Metro Winds, a collection of six stories, is an eminently satisfying offering, diverse yet each connected by its quality and by the movement through the real world to fantastical, alternate worlds. Some have links to popular fairy tales, including the Princess and the Pea, whilst all have settings which will be familiar – Australia, Paris, Venice – and themes and premises which are at once recognisable yet somehow unfamiliar.

With subject matter including broken homes, marital strain and loss, couched in fantastical scenarios such as a wolf prince who abandons his wife and child because of a curse and a sister who mourns the disappearance of her younger sister but must relinquish her in order to safe a world, these are stories which grip the reader and keep the pages turning, staying with you long after the final page.