There are so many kids in Reuben’s family, his mum has to count them when they go out to make sure no one gets lost or left behind.

‘One, two, three, four, five, six, seven, eight, nine,’ she says touching each one as they climb in the car.

‘You are SO embarrassing, Mum,’ they say. ‘Everyone is looking at us.’

But Reuben loves his mum touching his head and counting. It makes him feel safe, because he knows she will never leave him behind.

There are so many kids in Reuben’s family, his mum has to count them when they go out to make sure no one gets lost or left behind.

‘One, two, three, four, five, six, seven, eight, nine,’ she says touching each one as they climb in the car.

‘You are SO embarrassing, Mum,’ they say. ‘Everyone is looking at us.’

But Reuben loves his mum touching his head and counting. It makes him feel safe, because he knows she will never leave him behind.

Reuben is part of a large family living in the north of Australia. Every Saturday they go fishing. This Saturday, they are going to One Mile Beach. Reuben loves to go, but he also does some worrying. He worries a bit about the waves, and the crabs and other things that might go wrong. As the outing progresses, Reuben, although sometimes scared, calls on all his inner resources so he can help where help is needed. With the help of his brothers and his father, he decides to be brave and to be strong, where this is required. Helping his father and his bigger brothers makes him feel different. He’s not quite sure how it feels and wanders off to think about it instead of taking a nap with his younger siblings. And that’s when the biggest test of his strength and bravery is needed. ‘Losing Reuben’ is illustrated throughout in colour. A header and footer shows Reuben cartwheeling across spreads, progressing as the story unfolds. Some words are picked out in larger or different fonts.

Losing Reuben is a new title in the ‘Mates’ series from Omnibus Books. This series offers uniquely Australian stories for newly independent readers. It introduces a way of life particular to the north of Australia and indigenous Australians. At the same time, it is a story common in many families. Reuben is a small (but not the smallest) member of a large family. In the past, he’s been one of the little kids, staying with his mother and older sisters as his father and older brothers embark on more adventurous aspects of their outings. But this time, he’s in transition to being one of the big kids. And that means facing his fears. These challenges are just a normal part of the day. Reuben, like many children, internalises some of these fears, but when required to, finds a way to overcome them. ‘Losing Reuben’ is a delightful story of the ups and downs of being part of a large family. Recommended for newly independent readers. 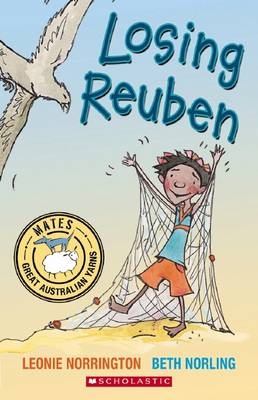 Tillithia loves living in Palmerston Heights. She loves her school. She loves hanging out with Lily, her next door neighbour. But most of all she loves the school holidays.

Sometimes she goes with her mum and Lily to a market for breakfast, or they ride their bikes to the park. This morning Tillithia has a plan.

Tillithia loves living in Palmerston Heights. She loves her school. She loves hanging out with Lily, her next door neighbour. But most of all she loves the school holidays.

Sometimes she goes with her mum and Lily to a market for breakfast, or they ride their bikes to the park. This morning Tillithia has a plan.

Tillithia might have plans for this holiday day, but so does Mum. And Mum’s plan is not the same as Tillithia’s. Tillithia and Mum are off to Goose Camp with Auntie Doreen. Mum knows Auntie Doreen will help Tillithia to learn Aboriginal ways. Tillithia just remembers their last trip, when she got wet and dirty and ate mussels that tasted like snot. She’d much rather stay in town. But that’s not going to happen. Tillithia begins by sulking but is gradually won over by curiosity and the good humour of Mum and Auntie. Eventually, Mum’s teasing stops when Tillithia helps Auntie gather food for the old ladies. Now it is Tillithia’s turn to tease. Bush Holiday has coloured illustrations throughout and uses several text types to highlight different words.

The ‘Mates’ series from Omnibus has many titles. Each is full of humour and tells a tale that is particularly Australian. In Bush Holiday the reader travels to Northern Territory and is taken on a road trip holiday. It is a story of family, and learning and sharing. Tillithia experiences a different sort of education in the holidays, where knowledge of and respect for the land are taught in an active way. Bush Holiday gently reminds the reader that life is full of learning and that there are many teachers. The joyfulness of Mum and Auntie as they travel and teach their reluctant student is delightful and should resonate with readers young and not-so. And when Tallitha reflects on her unexpected bush holiday, it is the connection with the land and her greater family that she remembers most fondly. Recommended for newly confident readers.

This exuberant picture book is a delightful exploration of childhood, particularly within an Aboriginal community. As the young protagonist cavorts through the pages, he is watched – and helped – by a variety of doting family members. Most of the experiences and actions expressed in the text are ones which children and parents of every background will relate to – running, jumping, copying, giggling, bumping – but the illustrations set the action outdoors in a remote community with trees, ochre landscapes, even crocodiles adding interest for children from other parts of Australia and, importantly a setting to which children from such isolated communities will relate.

The creators, author Leonie Norrington and illustrator Dee Huxley, visited three northern communities and workshopped ideas for the text and illustrations, creating a delightful celebration of childhood and community life.

Look See, Look at Me! by Leonie Norrington and Dee Huxley
Allen & Unwin, 2010

Damien is running down he road pulling his mum, holding her tight so their out-of-time steps don’t jerk their hands apart.
‘Wait, luv,’ she says, ‘I’m tired.’
‘No. they’re coming!’ he yells, looking behind. ‘Keep running!’
But she won’t. So he flips her up onto his back and gallops on all fours, his hands and feet stretching out like a horse.
‘No, Damien, let me down.’
There’s a house in the distance. We can hide in there.
He’s running as fast as he can. But it’s not coming any closer. The house isn’t coming any closer! The road is moving beneath him like a running machine, keeping him on the same spot.
The men are shouting now, firing shots. Trees and dirt explode around him.
Damien ducks into the bush, running close to the ground; his lean body curves like a panthers’, the silent bush stroking his smooth black hide. Mum is asleep along his back. He gets to the yard, slips around the side of the house, crawls beneath his old bed, supple as an eel, and into Mum’s bedroom.
And they’re there, waiting, all of them, sitting on Mum’s bed: Bedford, 88, Uncle Ronald, Gregory and Mum.

Damien and his mum have moved. Again. This time, they’re in the Northern Territory and Damien has started at yet another school. It’s not going well. His mother has a history of partnering with violent men. This time though, she assures him, things will be different. Damien has heard this before, and it’s always the same. Things start well, go downhill until he and Mum have to run. Again. So it’s no wonder really that he struggles to adjust to a new school, to make new friends, to trust anyone. And now his mother looks like she’s taking up again with 88, Damien’s father who has beaten her before. Damien’s only solace is drawing. He draws when nightmares wake him, and when thoughts overwhelm him in daytime.

The Devil You Know is both unsettling and compelling. From the front cover, showing a cowering boy and a large tattoo-ed man, it’s clear this is not going to be a fairytale. But Leonie Norrington’s touch is light, even when describing or alluding to the weightiest matters that a teenager should never have to face. The reader is invited into Damien’s world, asked not to judge him, but to walk with him awhile, to understand the life that has shaped him. Damien is a survivor, but he carries scars. Damien does find friends, not always where he first looks for them. Themes include domestic violence, bullying, racism (although some of the strongest and most empathetic characters here are aboriginal) and abuse. Highly recommended for secondary readers.

This title can be purchased online from Fishpond.

Camping at Barrumbi, Dale has a disturbing dream about his big brother, Sean. When he wakes, he sees Sean creeping away from the campsite, and wonders whether he should tell him about the dream. When the time comes to leave Barrumbi, Sean cannot be found.

Back at the community, Dale’s family face a long wait for news of Sean’s fate. In the meantime, the whole community suffers the devastating effects of Sean’s actions. The wet hits with a vengeance, flooding the settlement and the water spirit tries to drown first Dale, then his sister, Meg. Will the family be intact at the end of the wet?

The Spirit of Barumbi, a sequel to Barrumbi Kids, picks up the story where the earlier book left off. This book, however, may appeal to a slightly older audience than the first. It is full of adventure, suspense and an explortaion of the difficulties of trying to live in two cultures – those of the traditional Aborigine and the contemporary world.

Norrington’s prose is brilliant, drawing the reader into the emotional turmoil, whilst providing relief in lighter moments.

The Spirit of Barumbi, by Leonie Norrington
Omnibus, an imprint of Scholastic, 2003

Dale and Tomias are best friends. Dale’s grandfather was the first white man to setle here at Long Hole, where Tomias’s ancestors have lived since the dreaming. Their Mums grew up together too.

Now they’re in year seven, their last year at the community school. It’s supposed to be fun – but the arrival of Gordon and his father, Mr Armstrong, has changed things. Mr Armstrong manages the community and his new rules upset everyone. Gordon thinks HE owns the place.

The Barrumbi Kids is a delightful story about growing up in Australia’s remote communities. Dale and Tomias, and their friends, move between Aboriginal and white cultures – fishing, hunting, playing and going to school. They get into trouble and they learn about themselves, about each other and about the wider world.

Leonie Norrington spent much of her childhood on a remote community in Australia’s north, part of a large Irish-Catholic family. She later worked in journalism. This is her first novel for children.

Barrumbi Kids is a an exciting novel, suitable both for classroom and private reading.