‘Now, I know what you are thinking,’ Hu Tang paused. ‘You are thinking that there are hundreds of zoos, why does the world need another one? Indeed, what can China do with a zoo that has not already been done before? Ladies and gentlemen…this is what we can do.’
At that moment, the speeding bullet train burst out into brilliant sunshine and CJ found herself staring at an awesome sight.

In spite of its massive population and a booming economy, China lags behind its adversary, the United States of America, in a key way: it is not the cultural ruler of the planet. China needs something to compete with the power of Disneyland, the dreamfilled destination which epitomises commercialisation and is known the world over. When it is discovered that the most famous mythical creature of them all is not in fact a myth, and is hiding deep within China, it seems that the answer is clear: a zoo unlike any other, where dragons fly free. People will come from everywhere to see them, and will leave knowing that China really is the world ruler.

CJ Cameron doesn’t know any of this. All she knows is that the Chinese government has requested that she visit its new zoo on behalf of the National Geographic. With her brother Hamish and a party of other influential journalists, she is taken to a secret destination, little knowing what it is she will see there. Soon, though, her amazement at the realisation that the zoo houses dragons, is replaced with horror as she realises the dragons are turning rogue, and that zoo officials will do anything to ensure she doesn’t escape to spread the word of this glitch in the zoo’s operations.

The Great Zoo of China is a fast-moving, often gruesome, action thriller of the kind Matthew Reilly fans have come to expect.  Moving almost as quickly as the bullet rains which appear in parts of the novel, the story unfolds over a very short space of time, but manages to include many deaths and lots of destruction, along with a feisty main character who, with some help, tackles dragons and human foe with ingenuity. If the plot sounds familiar, Reilly admits that it was inspired by his love of the novel Jurassic Park and, although he has worked to make it different, by setting it in China and by using dragons instead of dinosaurs, there are similarities which make his homage obvious. This doesn’t make the book less likely to appeal to lovers of Reilly’s work, or of action novels in general, who will enjoy the premise and the plot. 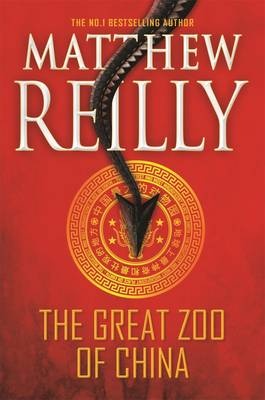 The race was barely nine minutes old when Jason Chaser lost his steering rudder.
At 690 kilometres an hour….
Jason rammed back on his collective, and somehow managed to right the Argonaut with only his pedal thrusters just as–shoo!-shoom!-shoom!–three of the other top contenders whizzed by, rocketing off into the distance, kicking up geyser sprays in their wakes.

In the most important race of his life, one that could win him a place at the International Race School, Jason Chaser has an unfortunate accident. In spite of continuing on and refusing to give in, Jason comes last. But his determination has caught the eye of someone who matters and Jason soon finds himself on his way to the school and in training to become a top class hover car racer.

At the race school Jason trains with his little brother Bug, his navigator and his new friend and mech-chief Sally. The trio are determined to make their mark at the race school and in the wider world of racing, but they are up against some pretty stiff competition. They will have some pretty big battles to fight, both on and off the track.

Hover Car Racer is a fast-paced futuristic novel about a time when hover vehicles are the primary form of transport and the international sporting scene is dominated by hover car racing. There are plenty of race scenes, loads of intrigue and a plot which pits the underdog Jason against a cast of villains including a book maker intent on blowing him up and leading drivers who want to stop him from usurping them – and will stop at nothing to do just that.

Hover Car Racer was first published online in a daring venture involving sponsorship and fortnightly instalments being made available free of charge. The film rights have been optioned by Disney.

Teen boys will love the racing car action, but older readers of both sexes can appreciate the pacey plot, too.

The odds were stacked against them.
Their rivals numbered in excess of 200 men.
They had only nine.
Their rivals had massive logistical and technical support…The Nine were only carrying only what they’d need inside the mine.

As the Earth heads towards what could be the most monumentally important day in its history, nations are involved in a scramble to locate the Seven Wonders of the Ancient World. Hidden within each of these wonders is one of the seven pieces of the capstone to the Great Pyramid. And this capstone holds the key to world domination – if only it can be assembled in time.

Every nation that knows the significance of the looming solar event is keen for a shot at the power. Two big forces look to be in the running – a European coalition led by the Vatican, and the mighty US. But a small group of nine, an unlikely coalition of representatives of eight small nations, is determined to make sure that no one nation should possess ultimate power. Led by Captain Jack West, former Australian SAS, the nine race through the wonders, avoiding booby traps, unlocking secret messages – and avoiding the might of the opposing teams.

Seven Ancient Wonders is an action-packed quest through the Wonders, with author Reilly unrelenting in the twists and surprises he delivers. Readers are kept guessing throughout as the drama plays out against awesome backdrops. Whilst some of the details of pathways, booby traps and secret chambers can be a little difficult to follow, this can be forgiven by the action, which is really what drives the story.