One kiss for baby, under mistletoe.
Two kisses for baby, catching falling snow.

Playing under mistletoe, singing with the choir or jingling Christmas bells, Christmas kisses abound in this gentle rhyming offering. Counting from one to ten, and finishing with the children (and their animal friends) asleep on Christmas Eve, the text would make a perfect bedtime wind down in the lead up to Christmas.

The pastel toned illustrations are adorable, with the numbers hanging in large baubles, the kisses snowflake adorned love hearts and the characters – two older children, baby and a rabbit and a fox – happily preparing for Christmas.

This would make a perfect gift for a baby or toddler. 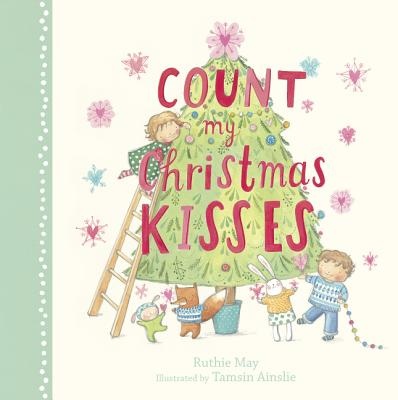 This is a book for the whole family – kids and oldies alike. It’s full of old-time Aussie recipes, with a few new ones added in. Some you will have heard of, like Damper and Lamingtons – others are brand-spanking-new versions of golden oldies, like Edna Split and Roo Doo in a Patty Case. Some of the recipes have come all the way Down Under from faraway places like Italy and Mexico, but here they are given a you-beaut Aussie twist. All the recipes celebrate the grub that Aussies love to eat – from barbies with the rellies to fine dining with mates beside the pool.

When a recipe book is titled, Stew a Cockatoo there is a frisson of anxiety about the contents. And there is a recipe for Cockatoo Stew in amongst the other offerings. It may not ever become your favourite meal. But Stew a Cockatoo is more than a recipe book. It does have a list of the bits and bobs you might need in a kitchen, but there’s more. Like a late night tv advertisement that always promises more, ‘Stew a Cockatoo’ delivers Aussie-isms and an entertaining dollop of history. Some recipes, like that for damper, may see familiar, but can you guess what a ‘Redback Spider’ is and how you might make it? Each double page spread features an Australian saying, a bite of history and perhaps a definition or two, as well as a recipe or three. Leigh Hobbs’ fans will recognise his illustrations, and trademark humour. And with recipes for You-Beaut Snapper and Banana Benders, you’ll not go away hungry.

Stew a Cockatoo is both hilarious and serious, sometimes simultaneously. The recipes (mostly) can be made in any kitchen, or over any campfire. Some of the names have been changed to protect the innocent. Readers will take several journeys through Stew a Cockatoo . Firstly they’ll giggle at page titles like ‘Horse Doovers’ and ‘Whacko the Chook!’, then they’ll try to imagine the taste of recipes like ‘Roo Doo in a Patty Case’ and ‘Echidna Delight’. Finally they’ll return, again and again, to the recipes. Recipes are written in plain language, with easy to find ingredients (well…mostly). The target audience is pre-teens and it is suggested that children seek assistance and company in the kitchen. Sure to become a kid’s kitchen favourite, Stew a Cockatoo would also make a great gift for overseas visitors.

This book can be purchased from good bookstores or online from Fishpond.

Count My Kisses, Little One is a first counting book. A small girl frolics through the pages with ‘baby’ (a toy dog), and friends Rabbit and Bear (not that any are named). Numbers one to ten are counted in kisses as the group make their way through a single day. They play inside and out, read a story, have a bath and prepare for bed. The small girl is ‘mother’ looking after her ‘baby’. On each page there are hearts (kisses) to count, accompanied by a simple rhyme. Illustrations are gentle watercolours on a cream page, soft and beautiful. Count My Kisses, Little Oneis a square format hardback with a musk pink spine. The four characters dance their way across the cover, surrounded by kisses.

Count My Kisses, Little One is a lovely book for babies first being introduced to books and to numbers. There are lots of extras for them to find after the kisses have been counted. The activities of a normal day are modelled throughout, finishing with ‘baby’ being tucked up in bed. Small children will recognise and enjoy this portrayal of these familiar daily activities. Recommended for babies and preschool children.