‘Where have you been working…’ He glanced down his clipboard for my name. ‘Dennis?’ He looked up.
‘I’ve been shearing down the Board of Works farm out of Werribee.’ I didn’t tell him this job was my get-out plan from shearing.
‘Worked underground before?’
‘No.’
He was taken aback. ‘Never?’
‘No, never.’

Twenty-seven years old, a recovering alcoholic, and with a faltering marriage, Dennis McIntosh goes to work on an underground construction site in Melbourne’s west. He hates confined spaces, so working underground constructing sewer pipes probably isn’t his ideal job, but he knows he needs to stick at it. And he does, for seven long years, before resurfacing a changed man.

The Tunnel is an honest and open account of one man’s working life and the way he uses it to confront his past and his perceived failings. McIntosh enters the tunnels poorly educated and with not a lot going for him, but decides in his time underground that it is time to take control of his life, get an education and achieve the things he wants to achieve.

A Penguin Special, The Tunnel is a quick read, exploring the role of unions as well as issues of education and self-determination. 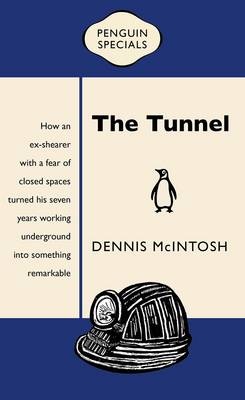