This time Meilin didn’t run, She just didn’t have the energy anymore. But she walked fast, ignoring her hunger pains and rasping throat, the heat and the humidity.
“I will find a way out,: she whispered. “I will get to Zhong. I will fight the Devourer and our enemies.
But against that, there was a small voice in her head that whispered a hopeless, constantly repeating thought.
I’m going to die. I’m lost and I’m going to die.

Meilin is lost in a bamboo maze, regretting leaving the rest of the group, and wondering if she’ll ever see them again. The other young Greencloaks are searching for the next talisman, that of Dinesh, the great elephant. But there are enemies everywhere. The Conquerors want to destroy the balance between humans, animals and the spirit world, and Conor, Abeke, Rollan and Meilin will need to work together if they have any chance.

Blood Ties is the third title in the Spirit Animals series following four young heroes as they try to save Erdas. It stands on its own reasonably well, with enough back story filled in to make sense both of what happens and what has gone before, but is most suitable for readers who have read the first two.

Plenty of action, beasts both mystical and real, and a strong cast of characters make this likely to appeal to young fantasy and action lovers. 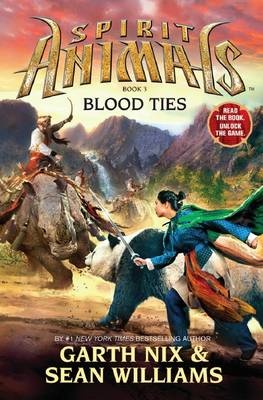