Mrs Keith Miller, internationally known aviatrix, was taken to the county jail here today and held for investigation by State Attorney’s investigators. Jail attendants said they understood she was held in connection with the shooting of an airline pilot.

Jessie Miller, known to those who loved her as Chubbie, has a thirst for adventure. Married far too young, and very unhappy, she holidays in England where she soon manages to sign up for an almost unfathomable quest – as a passenger flying from London to Australia for the first time. Although she and her pilot partner Bill Lancaster are beaten by another plane, Chubbie becomes famous as the first woman to complete the journey. Unable to settle back down to life in suburban Australia, she and Bill travel to America where her various flying feats included flying in the first air race for women with Amelia Earhart. But along with the many highs of a career as a pilot, CHubbie also finds herself facing terrible lows – crash landing in the Flroida Straits, being accused of faking her disappearance for publicity, and finding herself at the centre of a murder trial.

The Fabulous Flying Mrs Miller is an absorbing tale filled with twists and turns. As fiction it would seem almost implausible – but this is a true story, set in England, Australia and the United States in the 1920s and ’30s, the golden age of aviation, where adventurous flyers – and the manufacturers and fledgling airlines behind them – pushed themselves to do what no one else ever had. History buffs, aviation enthusiastis will find this story of a remarkable woman fascinating.

‘Right there and then I made up my mind that if ever I got the chance, I would do everything in my power to hurt them, to damage the Nazis and everything they stood for.

After a difficult childhood in Australia, Nancy Wake manages to travel first to London and later to Paris, where she talks herself into a job as a foreign correspondent. She is happy in Paris, and meets and marries a man she loves, but as the Nazi Party’s influence grows, she worries about what will happen, and when war breaks out, her fears are realised. Soon, Nancy is part of the resitance movenent, working to undermine the Nazis and to help their victims.

The White Mouse tells the remarkable story of a remarkable Australian woman and her work during World War 2: driving ambulances, helping escaped prisoners, transporting radios and other banned items. As a story which most Australian children are unlikely to know, and one which shows a strong woman working hard to make a difference in a time of hardship, the book is a really important offering.

The illustrations – in pen and ink and using techniques such as newspaper headlines and maps in the backgrounds of some pages, and text boxes looking as if they are taken from aging notebooks – have the feel of the time period in which they are set, and are reminiscent of the war story comics and paperback novels which adult readers may remember.

A quality book about a fascinating Australian.

There must have been times in Tess Payne’s life in Victoria’s remote mountain country when she paused, did a double-take and wondered how she got there.

A comment by an acquaintance about Aussie women living as pioneering once did led to Anne Crawford researching and writing a book about such women. She set out to find – and speak to – women living in remote parts of Australia and working hard to make lives for themselves and their families.

From Tess Payne, a city woman, who moved bush to support her husband’s dream, to Lee-Anne Bright who grew up on a remote property and then built a career governessing, and Emmie Wehr who raised her daughters single-handedly while also forging a career as a horse trainer, Women of Spirit is a testament to women who have endured personal trials, illnesses, and the extremes of Australia’s climate and landscape to do what they do. Crawford tells their stories with a sensitive touch, weaving the stories so that readers have an opportunity to know what shapes each woman, as well as what it is she has achieved. 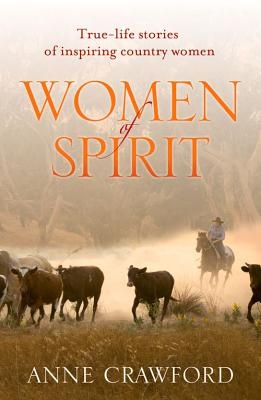