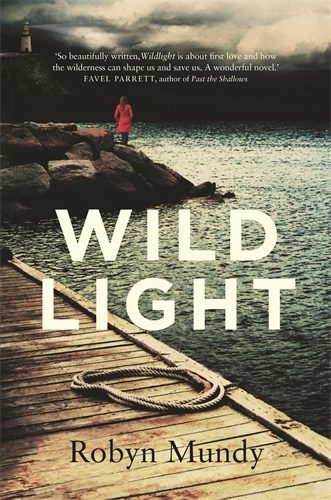 Below, a limp windsock gave way to a clearing in the bush that looked too small for a landing pad. The blue nose of a vehicle peeked through the trees. The helicopter hovered, swayed its hips. They inched lower, the pilot peering through the side window. He manoeuvred the throttle as lightly as a computer mouse. They were even with the treetops, now they were below them. Steph read a painted sign: MAATSUYKER ISLAND. A soft thud, a bounce, the kiss of solid earth, an exhalation as the rotors lowered pitch. They were down, they were safe.

Steph is not thrilled to be coming to Maatsuyker Island. She’s sixteen and supposed to be in her last year of school. Instead her parents have brought her to this remote outpost off the coast of Tasmania to act as caretakers of the island and its lighthouse. They hope that their time there, largely cut off from the outside world, will help the family to heal from the tragic loss of Steph’s twin brother.

Angry and resentful at being on the island, Steph drifts, her studies losing importance and her plan to become a doctor seeming unlikely. Meeting Tom Forrest, a deckhand on a cray fishing boat which visits the island, provides a welcome distraction. 19 year old Tom has problems of his own. He doesn’t want to be deckhand all his life, but his manipulative brother isn’t keen to let him leave. In the meantime, he’s fishing illegally, making Tom party to his behaviour. As the teens grow close, they dream of a life back on the mainland. When Tom goes missing, Steph is devastated.

Wildlight is a haunting, beautiful coming of age tale about first love, set amongst the wilderness in a way that makes the setting almost a character. With most of the book set in 1999, the use of a prologue and concluding chapters set in 2015 shows the impact the teen year events have on the adult lives of the characters.

Mundy’s poetic style and well-developed characters take the reader on an emotion-filled journey.

The Whalers croon while Chad provides the bass. The frozen sea. The frozen sea. When we said goodbye – he catches a sudden movement over the top of the blade and jams on the floor brake. He yanks the steering control to avoid the figure crouching directly in his path. The right track locks and the D8 slides like a chord on The Whalers’ guitar…The woman before him grabs at her equipment, tumbling over herself in an attempt to leap clear. The Whalers strum. Chad yells. The woman skates on one knee, legs tangled with those of her tripod. How the twenty-tonner doesn’t collect her he’ll never know, but the D8 completes on lithe and graceful loop before easing to a stop.

Freya is a photographer with a passion for the photographic work of Frank Hurley, the official photographer on Douglas Mawson’s Antarctic expedition of 1911-1914. Now Freya is visiting Antarctica herself, to discover Antarctica for herself and photograph it’s beauty, it’s danger, and the life of the people who work there. In Antarctica, Freya hopes to capture images for an exhibition – but, at the same time, she sees an opportunity to escape a stifling marriage for a few months.

Chad McGonigal is also at Davis Station, but unlike Freya this is far from his first time. He is regular in Antarctica, having been coming South to work for over 20 years. Largely a loner, Chad loves the isolation and the beauty of the place, but little expects to also fall for the photographer he is asked to escort around Antarctica.

Interwoven through Freya’s story is a fictionalised recreation of Douglas Mawson’s expedition, with its harshness and tragedy. Mawson is portrayed as a rounded character – not just the leader of a famous expedition, but also as lover, as driven dreamer and as flawed as any human. The story is strengthened with the inclusion of letters between Mawson and his fiancé, and draws on the diaries and journals of members of the expedition.

This is a richly layered story – or, rather, set of stories, combining as it does the stories of Freya and of Mawson, along with those of Chad, and of Mawson’s fellow expeditioners. The beauty of Antarctica is present in both stories, as is its harshness, and the mixture of joy and hardship of life in a place where humans are not meant to be.