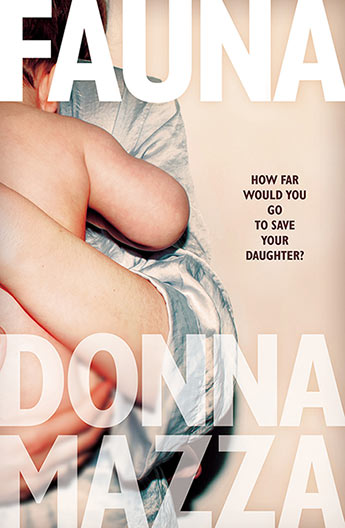 Full disclosure: I personally know Donna Mazza and consider her a friend and mentor. As much as this is an honest review, I’m so glad to be able to promote this book and I wish Donna the best success with Fauna – the biggest royalty cheque and the most glowing reviews. Speaking of which, pick up a copy here.

Over the last few years, as the climate change “debate” has raged on and the effects of our environmental destruction/pollution have irrevocably altered the world’s ecosystems and climate, we’ve seen a flood of fiction that falls under the moniker of “cli-fi” or climate fiction; essentially, fiction – more often than not science fiction – which addresses and extrapolates on the horrors of climate change, and humanity’s evolving relationship and treatment of the world’s flora and fauna.

Fauna, set in the so-near-it-could-be-now future, could certainly fall under this sub-genre of speculative fiction, but in Mazza’s novel a world ravaged by climate change is more background noise than narrative skeleton. If you pay attention to such demarcations, Fauna is more literary than genre, leaning into the more contemplative and character-driven tone of a Margaret Atwood or Ian McEwan. Fauna explores a truly original and thought-provoking conceit through the troubled but quotidian lives of its characters.

In the wake of de-extinction programs that have successfully resurrected species like the Thylacine, passenger pigeon, dodo and woolly mammoth, the next species on the checklist is something far closer to human: the Neanderthal. Protagonist Stacey has a husband (Isak) and two young children (Emmy and Jake), but after the loss of a third, unborn child, she signs up for a kind of IVF treatment with LifeBLOOD®, a company at the cutting edge of de-extinction technology. LifeBLOOD® provides the family with much needed financial support to carry and raise a child that is biologically Stacey and Isak’s, but genetically altered with Neanderthal DNA. As Stacey explains it, “the cells … some of them are mine and Isak’s, but others were snipped and sliced and fused into our baby. There is not just us in there. Her whole genome was recovered and reissued: a new work using old materials. Somewhere in prehistory … she is the child deposited in a tooth found under layers of sediment in a deep cave. Only accessible via a narrow tunnel, amid a ring of stalagmites, an ancient campfire. The fossilised remains of a woolly rhinoceros, butchered mammoths and red deer… From there she has come back. Back to us. I have excavated her.”

The novel’s pace is slow and dreamlike, a story told through the growth of Neanderthal child Asta, from genetically altered embryo into little girl, and the ebb and flow of her family around her, about her. In many ways it’s quite a claustrophobic story, narrated in first person from Stacey’s point of view. With its small cast of characters and its introverted, introspective tone, Fauna unfolds at its own pace, largely untethered from the weight of plot or external conflict.

The economy of Mazza’s prose belies the narrative’s – or more particularly its characters’ – icebergian depth. Every word feels carefully chosen and painstakingly placed, every page a blistering rainfall of ideas and imagery made up of individual drops all falling towards the same purpose, narrative- and gravity-driven wonder. This is a beautifully written book, and the language flows in a consistent and engaging tone.

Stacey is a character very much in her own head, but Mazza is canny enough to constantly engage and relate her protagonist to aspects of the world around her, the human often juxtaposed with the environment. Animals and wildlife are always close by, playing a significant role in the characters’ lives and contributing to the novel’s thematic core. Little details add weight to the story’s mood and accentuate Mazza’s crystalline imagery. In one scene, tension “hangs in a silent wake that seems to hiss”, which is evocative by itself, until “a languid fly crawls across a convex mango skin scraped clean by small teeth.” Fauna’s world feels lived-in and tactile, constantly responding to and being shaped by its characters. Stacey’s point of view is cleverly taken advantage of, and there’s a sly disparity between her dialogue and her inner thoughts, in the spaces between people, what’s spoken and unspoken. Mazza teases out this dichotomy with the glacial weight of all the complicated emotions and tensions and knots that lie between two people in a long-term relationship, their words often inadequate at articulating the vastness and complexity of their emotions.

Despite its grounded narrative, there is no escaping the strangeness of raising a Neanderthal child. During Stacey’s pregnancy, Mazza briefly lights upon the abject body horror of pregnancy, the baby that grows inside her “forming and assembling, stretching me into its own shape”. From this point, Stacey and her daughter Asta are tightly bound, often to the detriment of her husband and other children.

As a character in whose head we spend the entirety of the story, Stacey can be a difficult protagonist to empathise with. At one point, Isak tells her, “You’re very self-absorbed when you’re pregnant”, but she seems self-absorbed for most of the book. Her mindset is a deliberate choice on the writer’s part, and the primary source of conflict in the novel. This plays out very well in several ways, from Stacey’s anxiety during the pregnancy, to her reclusiveness when Asta grows up, her reluctance and embarrassment around other people and how she assumes they will react to her decidedly strange-looking daughter (whose true origins and nature she is forced to lie about). Unfortunately, however, Stacey doesn’t really seem to learn very much from her mistakes; she’ll alienate her husband or children in some way, acknowledge her actions and their negative affects to herself, the reader, and eventually in teary apology to whoever she’s shut out, but instead of growing or changing as a result of her self-awareness, she often circles back to reclusive and damaging behaviour.

As a result of this, Stacey doesn’t exactly have a dramatic character arc, and while at first I felt like this hampered Fauna’s momentum, I came to realise that the novel isn’t so much about a propulsive narrative as it is the mundane drudgery of everyday life, with its high and low points, the anxieties and arguments, the hopeful glimmers and moments of joy and love. Its innovative conceit aside, Mazza’s novel is far more about family dynamics, and in this Fauna is masterfully crafted and achingly evoked, unfolding more in the vein of real life than a constructed story.

Normally I feel like this kind of book would be written about a middle-class mother undergoing an existential crisis but it’s refreshing to see a family from a lower socio-economic bracket represented here, along with the dynamics their circumstances precipitate and cultivate.

The argument that Asta is human, “just not the same kind of human as everyone else”, dominates Fauna’s thematic arc and is the basis for much of Stacey’s conflict. LifeBLOOD® enforces a veil of secrecy around their research project, forcing Stacey and Isak to explain Asta’s anatomical anomalies as a rare genetic disorder, and other parents and children often assume Asta has a disability of some description. This touches on some engaging and deftly handled issues about the way society treats children with disabilities or differences. More often than not, however, characters in Fauna are refreshingly inclusive towards the little Neanderthal girl. It’s predominantly Stacey’s preconceptions about people that are negative or wary.

I mentioned before that Fauna doesn’t focus on the wider global issues like climate change in which the story’s context nestles. Mazza works this reasoning into the novel in a very effective way. By all but excluding greater global events from the story, it feels as though Mazza is commenting on people’s proclivity for ignoring large-scale events they’re not directly affected by, which is exemplified to a tee in Stacey’s insular attitude. She watches on television as “a record-breaking fire tears through the Canadian wilderness and a coal-seem gas plant has exploded. Dead geese are heaped with a bulldozer.” With barely a thought, she changes the channel to a cooking show.

With these aspects relegated to the sidelines, Mazza has plenty of room to sculpt a convincing portrait of family life, Stacey and Isak often reduced to exhaustion and irritability with the efforts of maintaining a family and raising a baby: “we bundle ourselves into human shapes and collect the kids from school.” These are hurdles enough on their own without the pressure of LifeBLOOD® looking over their shoulder and constantly checking in on their living property, enforcing specific dietary requirements and taking measurements and blood samples from Asta.

Scientific experiments aside, the family’s dynamic will be familiar to most people, with or without kids; Mazza’s world in Fauna is no different from today’s endless grind, where capitalism is causing – has caused – the collapse of the ecosystem and the zombification of the working class. Those enduring pressures mount as the novel progresses towards its melancholy and ambiguous climax, as Stacey’s brittle balance of sanity cracks. Reader and character alike sit taut, nauseous with the feeling that at any moment she might slip off the edge and shatter.

But Fauna isn’t all struggle and angst. It’s a joy to watch Asta grow, and her family along with her, and Mazza’s skill at portraying this is wonderful. Stacey notes that her daughter “understands more all the time but her vocabulary is still so small, growing incrementally though her body shoots like spring.”

Fauna isn’t what I’d call a feel-good book, but it is a beautifully written one that examines challenging ideas through the eyes of its equally challenging characters. Its premise is original and refreshing, and Mazza balances angst and anxiety with a sense of hope, and an appreciation of the natural world rendered in crisp, poetic prose. It’s a story that lingers in the mind long after the last page is turned, and holding the book in your hand, you can feel more than the mere physicality of it, heavy as it is with the weight of life, and history, and humanity.

You can visit the reviewer’s blog here.
Fauna is available online  or, even better, from your local bookstore, who could really use your support right now.