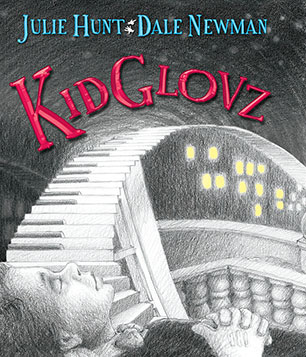 The coat stood in a paddock at the end of a row of strawberries. It was buttoned up tight and stuffed full of straw and it was angry.
‘What a waste of me!’ it yelled to the sun and the sky and the crows and the paddock.
‘What an unbelievable waste!’

A coat abandoned to life as a scarecrow on a strawberry farm sees an opportunity for change when a down and out man passes by. The coat beckons the stranger over and soon the man, recognising the beauty and potential of the coat, is swooping and soaring on an adventure. Together they travel to Big Smoke where, in a cafe, the man discovers the amazing talents of the coat, and of himself, as they play and perform for an adoring audience.

The Coat is a treasure of a picture book, with the delightful quirkiness of a talking, talented coat and an exciting adventure and transformation for both man and coat. There are messages and subtexts aplenty – the value of friendship, finding hidden talents, belief of self and in others, and more, making this a text which could be used in the classroom across the year levels, but it also just a book to be treasured.

The text is presented as a script font, initially against sepia-hued backgrounds. there is no colour in the illustrations as both coat and man are dejected and see little purpose in their lives. Colour starts to seep in as man and coat soar towards Big Smoke with the performance scenes featuring rich washes of colour. The book as a whole has a big rich feel with the burgundy hues of the cover making it a volume you want to hug.

This is an adorable book.

Available from good bookstores or online from Fishpond.

Precious Little wanted to fly
but she was only a circus hand.
She worked for the Light Fantastics. Every night she watched them flash through the air.
They walked the high wire and did swan dives and double somersaults way up in the big top.
They were brave and strong and they never looked down.

Precious Little is part of the circus, but not the part she’d like to be. While others tumble and spin in the air, she is cleaning shoes and retrieving fallen sequins. She tries, but her efforts are clumsy and awkward compared to these high-flyers. It seems she will never be more than an assistant. Others ask her to join their acts, but it’s an aerial performer she wants to be. Then her friends, Fat Chance and Tough Luck offer her the opportunity to try out her skills on a rope stretched across the top of their lucky dip. Gaye Chapman’s illustrations burst from the page, spinning and twirling like the best circus act. She uses every part of every page in an explosion of colour and movement. For Precious Little she used sepia ink line drawings, acrylic ink plus tea-stained paintings and collaged metallic papers.

Precious Little is a very rich offering. The co-written story is poetic and filled with wonderful names from Precious Little herself (which can be interpreted as nothing or everything) to Fat Chance and Tough Luck, faded old characters who mother Precious Little. The illustrations fill each opening, with text ribboning across and around the page, like the music that floats through a circus tent and beyond. The front endpapers show the circus tent and a high tower with both seen at a distance set in a road-crossed landscape. The end endpapers show the same landscape but Precious Little is now inside with her friends, part of the circus rather than a wishing observer. This a picture book for slightly older children, though younger readers will enjoy the rhythm of the language and the sumptuous illustrations.

Little Else lived with her grandmother at the bottom of Stony Gully. Times were tough. It hadn’t rained for years. There was nothing in the garden except one small cabbage and a stick of celery. Little Else and her grandmother were so poor they only had dinner once a week. They were so thin they had to walk over the same ground twice to throw a shadow.
One day, a man came to the door of their hut. He had large muscles and a handlebar moustache.
‘Sam Strong’s the name,’ he said. ‘I’m looking for spare children. Short ones, tall one, thin ones, small ones. Any kind will do. Ma will sort them out. She’s looking for apprentices for her bush circus.’
Grandma looked doubtful.
‘There’s no spare children here, Mr Strong,’ she said.

Little Else loves her grandma but also wants to experience all the world has to offer. So when the opportunity comes to join the circus and be paid in gold, she sees an opportunity to see the world and to provide for her poverty-stricken grandmother. She’s a plucky, audacious heroine with the ability to converse with animals. This skill comes in handy as she is tricked into joining the circus (Trick Rider), leads her own group of bushrangers (On the Run), and hunts down a legendary group of cattle (Ghost Hunter). It seems there is no injustice she can’t right, even at the cost of getting her face on a ‘Most Wanted’ poster. Even her horse begins to wonder if he should have stuck with Harry Blast, a notoriously bad-tempered bushranger.

Little Else is a wild child. Little Else is seven years old and she can do anything. And she does. With dry humour and wonderful place names like ‘Witt’s End’, Desolation Ranges, Windy Ridge, Dead Man’s Gap and Mt Long Gone, Little Else leads her rag-tag bunch of companions on missions both far-fetched and far-flung. All the characters are full of humour and personality, from the laconic bushranger’s horse ‘Outlaw’, to the cannibal’s child ‘Toothpick’. Little Else is a magnetic character, attracting loyalty from all those she meets, but suspicion from those who don’t know her. Her release of knackery horses earns her the title ‘horse rustler’ and another Wanted poster. Little Else is told in third person and the most wonderful deadpan humour and will have newly independent readers chuckling out loud. In contrast to the colourful characters within, the covers of each title are pastel, perhaps suggesting that people should not be judged on appearances (age, gender…), but also to entice small girls into something other than fairies and princesses. Wonderful fun.