They retraced their steps, but before they had gone more than a few chang, there was a disturbance in the forest. It was the same sound that they had heard near Shenchi village – branches breaking, undergrowth being flattened, the thud of large feet. There was also an unholy screech that made Tao’s insides turn to water. Below them, the nomads had also heard the noise and were picking up their weapons. Whatever was causing this disturbance was getting closer. Tao’s instinct was to run, but Kai stopped him.
“Wait.”

Since he left the monastery to travel with Kai, Tao has tried hard to learn the skills of the dragonkeeper, but it is not easy. He has no-one to teach him what to do, and he is yet to discover his special qi power. His journey with Kai is long and complex – he has to trust Kai that they are heading in the right direction. There are also many perils – a gang of violent nomads who will stop at nothing to get what they want, a ferocious seven-headed snake-beast, and a ghost who wants to freeze Tao’s blood.

Shadow Sister is the fifth book in the stunning Dragonkeeper series, and maintains the quality of its predecessors. Wilkinson’s characters are endearing – or frightful, in the case of enemies including Fo Tu Deng and Filong – and the settings well-painted. The action is finely paced, keeping the reader engrossed from beginning to end.

As with other books in the series, Shadow Sister could be read alone, but readers who have read the other titles will be glad they have, and those who haven’t will find themselves drawn to seek them out. 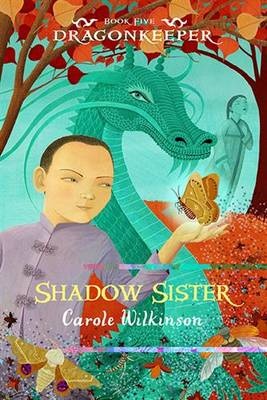