The statue stepped down from its cushion and stretched. Its tail lashed like a whip. It crouched until its huge nose was level with mine.

‘I wear eye paint and earrings as a sign of my royal blood, you foolish rat,’ it hissed. ‘I am not an offering. Offerings are made to me. This temple belongs to me. I am the Great Cat, Bastet.’

Ramses Rat is looking for adventure and a place to live, so when he finds the Temple of Bastet, from which come delicious smells, he thinks he has found the perfect home. But what he has found, instead, is an adventure. When Ramses tries to get into the temple, he is stopped by the Rats of the Nile, who say they control the temple. Not only are they determined to keep Ramses out, but they want to remove all other rats from the city. Ramses and his new friend Ka are in danger.

But when Ramses meets the Great Cat, Bastet, he finds an unlikely ally. Bastet does not want the Rats of the Nile ruining her city. With Ramses’ bravery and ingenuity and some help from Bastet, peace is restored.

Ramses Rat and the Great Cat Bastet is a junior novel set in Ancient Egypt, apparently the first in a series. Ramses Rat is an adventurous, interesting character, and the story is told in his first person voice.  Readers will enjoy the novelty of having a rat as a viewpoint character, as well as the chance to discover Ancient Egypt. The text is complemented with several full page black and white illustrations. 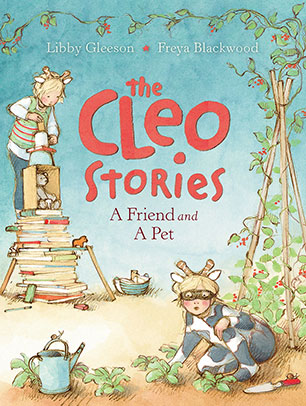 Uncle Tom is making himself a coffee. ‘What’s up, pumpkin? Youy’ve got a face as long as a wet week.’
Cleo shrugs. ‘There’s no one to play with and nothing to do.’
‘You’ve got an imagination,’ says Uncle Tom. ‘Use it. Make something up.’

Cleo is having a terrible day. It’s raining outside, her best friend Nick is away, and her parents are busy. There’s nothing to do that doesn’t seem to land her in trouble. When she spies her reflection in one of the rainy day puddles, Cleo has an idea – and her day gets brighter.
In a second story, Cleo desperately wants a pet. Her friend Nick has a new puppy and it seems like everybody in her class has a pet of some sort. Mum and Dad say a poet is a lot of work. But when Cleo sees Dad trying to get rid of the snails in the vegetable patch, she has an idea.

The Cleo Stories: A Friend and A Pet is the second book featuring the endearing Cleo and her family. The two stories in this new volume are just as wonderful as those in the first. Cleo is inventive and loveable, but she’s not perfect, making her someone young readers can relate to.

The format of the books, in hardcover a little larger than a regular chapter book, and with sumptuous colour illustrations on every spread, is inviting, and makes them suitable for either independent reading or sharing with an adult. Both adult and child will fall in love with Cleo.

Kenji let out a scream and jumped to his feet. He had heard of these forest goblins with their red faces and long noses but had never seen one.
’Now what could be so terrible that it would make a young boy cry?’ the tengu asked.

When Kenji’s mother is ill, he seeks help from his wealthy uncle, who refuses to lend them money. But a kindly tengu comes to his aid, giving him magic sandals which produce money when the wearer falls over. The catch is that ever coin leaves the wearer slightly shorter. Kenji is careful, but his greedy uncle soon hears of the magic, and learns the hard way that being greedy is dangerous.

‘Kenji’s Magic Sandals’ is the first of Two Tengu Tales from Japan. In the second story, ‘The Invisible Cloak’, greedy Hikoichi tricks a tengu and steals a coat that makes him invisible. But when the invisibility wears off in a public place, Hikoichi is left exposed and naked.

Two Tengu Tales from Japan are folk tales, retold by Duncan Ball from traditional Japanese folklore. The illustrations, inspired by classic Japanese art bring the mythical, magical tengu and the villages of classic Japan to life. 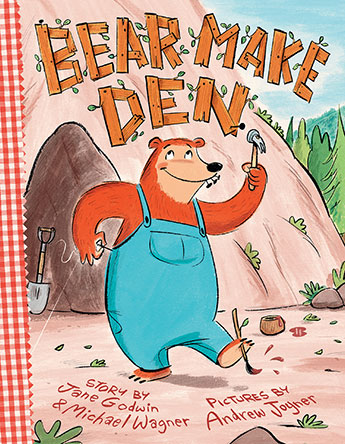 Bear has made himself a Den, band he loves it, until he realises it is missing something – or, in fact, some things. First it’s chairs, then a table, a bed, and more. Finally, with the Den fitted out and decorated, Bear realises what the Den really needs – more bears.

Bear Make Den is a gently humorous story told in very few words. Kids (and adults, too) will love the playfulness and even the very young will see the clues as to what is really missing, in the second, empty chair, the double bunk bed, the couch and so on. The underlying message about the importance companionship is a good one.

The text , by Jane Godwin and Michael Wagner, is ably supported by the artwork of Andrew Joyner, with Bear’s expressions , mostly happy but also puzzled, determined and more, an absolute delight.
Sure to please all ages.

Cheeky Monkey wanted to ask if he could go to the park, but couldn’t get his mother’s attention.

When cheeky Monkey goes to the park, he has lots of fun – but he forgets his manners. When he bumps his friends, sneezes on them, and interrupts them he needs to be reminded to say ‘Excuse me.’ But, by the end of the day, he remembers what he needs to do.

At a birthday party, Cheeky Monkey again has fun – unwrapping presents, pushing to the front of the line, blowing out candles, but he has upset Georgina Giraffe – because it’s her birthday, not Cheeky Monkey’s. Monkey needs to say sorry.

Excuse Me and Sorry are two in the Manners series of four designed to introduce manners to the very young. In board book format with bright, humour-filled pictures, they will certainly appeal to toddlers, and to their parents. Creator Lisa Kerr avoids being preachy, instead demonstrating each of the manners through Cheeky Monkey’s adventures. On my first day…

From dressing themselves, to eating breakfast, meeting new friends, counting, playing and even home time, My First Day at School takes youngsters through fairly typical things that happen on the first day of school. The use of a range of animal characters adds humour and interest. The character on the spread with the line “I dress myself”, for example, is a centipede, sporting brightly patterned socks on each of its numerous feet. Other spreads feature rabbits, dogs, owls, a rhino and more.

This use of the animal characters to illustrate what is very simple text does not remove it too far from children’s experience and the use of both familiar and less familiar animals – including a sloth, a puffin and a tapir (?) – creates room for discussion both about what is happening at school and about the animals themselves.

Perfect for a young child starting school, My First Day at School is a treasure from one of Australia’s bets loved creative teams in Bruce Whatley and Rosie Smith.

Nellie Belle is a an adorable brown and tan dog who is off on an adventure – digging holes in yard (and escaping), exploring the street, the beach and, finally, the park – before getting spooked by the dark and hurrying home to her safe warm bed.
With a rhythm and repetition reminiscent of the folk song “Billy Boy”, Nellie Belle is a fast-moving, happy celebration of dogs and adventure. The illustrations, rendered digitally, have textures reminiscent of children’s paint sets and of marble, collaged into delightful scenes. The joyful expressions of the animal characters is especially appealing.
Suitable for reading aloud to the very young, the repetition will encourage youngsters to join in.
Nellie Belle, by Mem Fox & Mike Austin
Scholastic, 2015
ISBN 9781760274108 I need a hug.
Won’t you cuddle me, Lou?
What? With those spikes?
Get away from me! Shoo!

A poor old prickly hedgehog is desperate for a hug, but nobody will give him one. They run away from him/her, complaining about spikes and prickles. It seems s/he’s destined not to be hugged, until something scarier than a prickly hedgehog scares the other animals away – and the hedgehog meets a snake, who only wants a kiss.

A funny rhyming tale about friendship, hugs and kisses, I Need a Hug will delight young readers with its humour and its gentle message about acceptance and not judging others by their appearance.
From the creator of Pig the Pug, I Need a Hug is lots of fun. 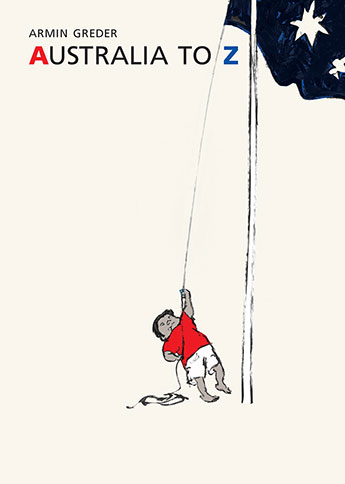 If you pick up this book expecting  an alphabet book to support young children in learning the alphabet you may be briefly confused or disappointed when you realise that, although it is an alphabet book, it isn’t likely to be of use in  teaching letter recognition. However, that doesn’t mean this is not an educational tool, and it is certainly likely to enlighten readers.

Australia to Z challenges readers to explore what it means to be Australian. Each letter is used to begin one word or phrase which represents an aspect of Australia’s psyche. From the opening spread – which contrasts the word Aborigine, complete with a lonely figure watching a sailing ship approach the coast, with the phrase Boat People, with a shadowed, crowded boat approaching the same coast – to the final one, presenting the words of the Advance Australia Fair with a series of images which question whether the words of the anthem are relevant or respected, readers are asked to think about what is being shown, and why it has been chosen. This spread follows the completion of the alphabet with Z for Zoo, showing not animals, but people pressed against the bars of a cage (are they staring in, or out?).

Some word choices are amusing, or might appeal to readers as being uniquely Australian – T is for Thongs, for example, and L is for Lamington – but for the most part the choices are disquieting – are Pokies and Calories really so important to us? The blend of irony, humour and pathos in both image and word choice provide so much fodder for thought and discussion that it is hard to believe how few words the book has and how deceptively simple the accompanying illustrations are.

This clever, thought-provoking look at Australian culture should find a home in every school and university in Australia. Brilliant.