James and his dad travel to meet Alec Campbell, the last living Anzac. James is bubbling with questions about all sorts of aspects of war. He wants to know whether Campbell was injured, whether he was scared, what he and the other soldiers ate. Interspersed with the questions from James, the story of Alec Campbell’s war service is explored. Illustrations swap between the present and 1915, with the latter images shown either full page or surrounded by a border, a bit like an old photo. The last ‘present’ image, with Alec Campbell and James together is also presented as a photo, perhaps suggesting the lasting memory of their meeting.

The Last ANZAC is based on a true story of the meeting between James and Alec Campbell. It’s not easy to share the enormity of a war with young readers. Gordon Winch has put the reader in the story in the form of a character, James, who is about their age. This way James can ask the questions that a young reader might ask. Illustrations also present more information sure to generate more questions and opportunities for discussion either at home or in the classroom. ‘The Last ANZAC’ offers an introduction to WWI for early primary readers, showing them Gallipoli through the eyes of someone who was there. Endpapers include copies of wartime letters, postcards and envelopes. 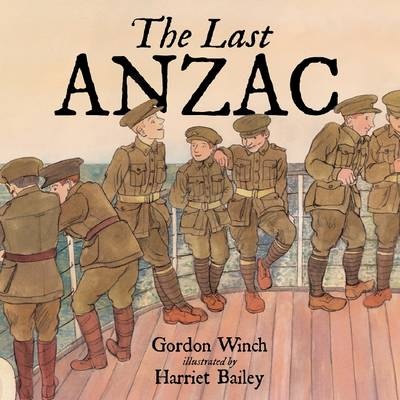