I am really please to welcome my friend and amazing author Teena Raffa-Mulligan here to Aussiereviews to blog about her latest book. Over to you Teena.

The path to publication is rarely smooth for my titles. Usually it’s a long and winding road from idea to book 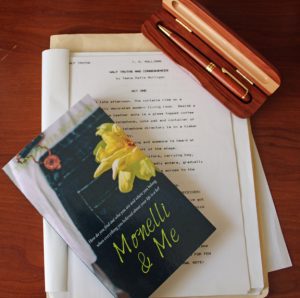 release and my new YA novel, Monelli & Me, released on March 31, was no exception.

I wrote the original version as a play for my then teenage daughter and her cousin who had joined the junior section of the local theatre group. That would have been about 33 years ago. It even makes me blink so I’m sure writers dreaming of holding that first book baby in their eager hands would baulk at the thought of any manuscript taking that long to reach readers. If anyone had told me I’d be releasing Kate’s story when I had teenage and young adult grandchildren, I wouldn’t have believed them.

I began writing and submitting to publishers nearly 50 years ago, writing my stories on a portable typewriter on my bedroom dressing table in between being Mum to three small children. From the start I took my author role seriously and recorded every submission in a postage book and on individual file cards for each title. I continued to maintain these records throughout the years as a backup, even as the way I worked and submitted changed radically, so it’s easy for me to track the progress of Monelli & Me.

The play version was called Half Truths and Consequences and it’s the story of a teenage girl who learns her mother has been keeping secrets. Kate has a biological father she didn’t know about and now he’s coming to Perth and wants to take her back to Brisbane to get to know her grandmother who is terminally ill with cancer. There was lots of scope for drama and I loved acting out all the parts as I wrote the play. Before offering it to the theatre group for production, I entered it into a major competition and received some invaluable feedback from the judges.

They highlighted my lack of stagecraft knowledge and noted that my characters didn’t respond strongly enough to emotional events. On a positive note, one judge said, “You have a definite writing talent and should keep honing it. Write something every day.” The other suggested the content “could make it a worthwhile contribution to discussion and personal reflection on human relationships, self-esteem etc for a secondary school aged audience.”

I filed the play away and went back to writing picture books, short stories, poems and chapter books for younger readers. It remained forgotten in my filing cabinet for many years until I joined a critique group run by best-selling novelist Anna Jacobs and decided to rework it as YA fiction. The round of submissions began once more but while I received some lovely comments, no one offered me a contract and the manuscript was put to rest again.

Changes in the publishing industry have led me to rethink the way I share my stories with readers and during the past 18 months I’ve become a ‘hybrid’ author. I continue to be traditionally published while also releasing some titles through my self-publishing imprint Sea Song Publications.

Following another rewrite and some positive feedback before I hit the ‘publish’ button, Monelli & Me has joined my growing list of indie titles. It’s been quite a process sharing Kate’s story…I will have to make sure Tali, one of the minor characters in the book, gets to tell her story much sooner.

Who do you trust when those you love most let you down?

Kate has been living a happy family fantasy. Her mum has been keeping secrets. Now the father Kate didn’t know about is coming to Perth. He wants to take Kate to Brisbane to meet her terminally ill grandmother. Kate is on an emotional roller coast. She has to find out who she is and where she belongs. Only then can she find out if her friendship with newcomer Joshua Perrin can be something more. 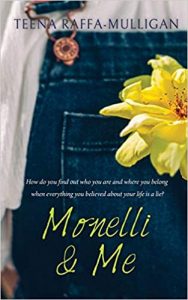 Teena writes quirky, whimsical books for children and her publications include picture books, junior fiction and MG novels. Her short stories and poetry for children and adults have appeared in magazines and anthologies and she has also worked as a journalist and editor on a diverse range of publications. Monelli & Me is Teena’s first novel for YA readers.

Thank you so much for dropping by Teena. I can’t wait to read your book.