Ryan O’Neill calls Michael Burrows’ debut novel, which was shortlisted for the 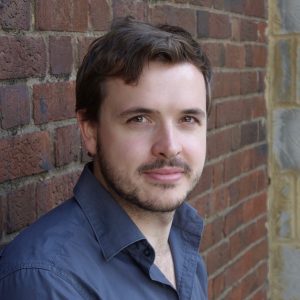 Fogarty Literary Award, ‘an engrossing war story and a captivating tale of love and obsesssion’.  In this post Michael shares where his inspiration came from.

The idea to write Where the Line Breaks came to me at 4 or 5 am, Anzac Day 2013, sitting in Anzac Cove on the Gallipoli coast in Turkey after a long night of readings, stories, music, remembrance and moving testimony.

The moment came when someone approached the microphone and recited a few lines of war poetry. I can’t remember which poem exactly, but it was one I was familiar with – Owen or Brooke, maybe? There’s something special about war poetry; the juxtaposition between beauty and barbarity. So it was that night in Gallipoli – the poetry cut through the chill air and you could almost feel the crowd glowing with appreciation. I loved it. My only question was, why weren’t they reading Aussie or Kiwi poetry?

And then I thought, but who would they read?

Where the Line Breaks concerns the discovery of an anonymous Australian

war poet, our very own Wilfred Owen or Siegfried Sassoon, called the Unknown Digger. At one point during writing, my novel was titled The Sky Where Red Stars Move, a line from the Leon Gellert poem ‘Red’. I hadn’t heard of Leon Gellert before researching my novel, strange as that seems. How was it that I knew of Brooke and Owen from school, but hadn’t even heard of ‘Anzac Cove’ or ‘The Last to Leave’?

Leon Gellert was born in Adelaide in 1892. He landed on Gallipoli on that first Anzac Day, was injured three months later and though he attempted to re-join the fight, he was repatriated as ‘medically unfit’ in June 1916. Maybe that’s why he isn’t better known – he didn’t have the tragic death of a Brooke or an Owen to push his poetry into the national consciousness. Unlike Graves or Sassoon, he stopped writing poetry after a few years and turned to journalism. He died in 1977 at 85 years old. But his poetry is wonderful, and in Gallipoli to Gaza, Jill Hamilton recognises him as ‘the only Australian poet whose work can be compared with that of the leading soldier-poets of the World War’. My personal favourite Gellert poem is ‘Anzac Cove’, with its devastating closing:

There are lines of buried bones:
There’s an unpaid waiting debt:
There’s a sound of gentle sobbing in the South.

Reading this poem for the first time, I really felt the gut punch of the Australian war experience, different to anything I’d experienced reading Brookes’ ‘The Soldier’ or Owen’s Latin homework.

Likewise, with the works of Clarence Michael James Dennis – or C. J. Dennis as he became known. Born in 1876, unlike Gellert, he never fought for his country, but his works, particularly The Moods of Ginger Mick, capture the sound of Australia like no-one else. Dennis was known as Australia’s version of Robbie Burns and the ‘laureate of the larrikin’. After his death in 1938, then Prime Minister Joseph Lyons said, ‘he captured the true Australian spirit.’ Read these lines out-loud in your finest Steve-Irwin-esque voice and tell me you don’t love it:

On the day we ‘it the transport there wus cheerin’ on the pier,

An’ the girls wus wavin’ hankies as they dropped a partin’ tear,

An’ we felt like little ‘eroes as we watched the crowd recede,

Fer we sailed to prove Australia, an’ our boastin’ uv the breed.

I love the dropped endings of words, the slurred ‘uv’ and ‘wus’. That’s why I opened my novel with an excerpt from The Moods of Ginger Mick.

Those two poets are my personal favourites, but there are plenty of Australians who deserve to be better known, like Private William M. McDonald (read ‘Camps in the Sand’), Archibald Nigel Guy Irving (read ‘The Dead’) or Oliver ‘Trooper Bluegum’ Hogue (read ‘The Horses Stay Behind’).

The Unknown Digger is a fictional creation, but he is inspired by the works of countless Australian soldier poets. I hope Where the Line Breaks encourages us to take a closer look at our own homegrown poets. Who knows, maybe this Anzac Day we can read a few lines of Gellert or Trooper Bluegum – something written by the original Anzacs themselves.

Where the Line Breaks is available in all good bookstores and online.

You can visit Michael online at: