The rough and ready fighting spirit of the Australians had become refined by an experienced battle technique supported by staff work of the highest order. The Australians were probably the most effective troops employed in the war on either side.’ Major General John O’Ryan, US 27th Division.

Between 1914 and 1918, 250,000 Australians joined up to fight alongside soldiers from the Allied nations. 60, 000 of these men never came pack, and countless others were wounded. As Australia marks the one hundred year anniversaries of these terrible years, Australians at the Great War – 1914-1918 brings them to life with a stunning collection of photographs, paintings, diagrams and other images, along with commentary to help understand their significance.

There are pictures of destruction and misery, but also glimpses of quieter times, as well as maps, posters and more. This is an excellent visual resource, compiled by historian Peter Burness.

I was young then. I remember the landing on the beach and the days of my time on the peninsula and returning home from the war, the past and the present coming together over the years. I remember the beauty of the ugly place.

Michael is a teenager off on an adventure, having joined up to keep his beloved brother Dan company. Their friends Knobby, Mack and Hughie are there too, and together they land at Gallipoli where they quickly realise that this campaign is like nothing they could have imagined.

From Australian screenwriter Christopher Lee, Seasons of War is a slim volume recounting one fictional soldier’s Gallipoli campaign. At the same time, it covers the major events of the whole campaign including insights into the workings of the British command (particularly General Hamilton), the tactics and statistics of all the major battles and the actions of the Turkish enemy. Michael’s story, though, is central, and as a first person narrator he is blunt about the horror of his experience, and of what goes on around him.

In amongst the great number of books released to mark the 100 year anniversary of the Gallipoli campaign, Seasons of War could easily be missed because it is a small book with an understated, though moving, cover  and it is not a comfortable read. But that’s the point. We need stories of war which paint the horror and the waste explicitly so that we understand as nearly as possible what happened. 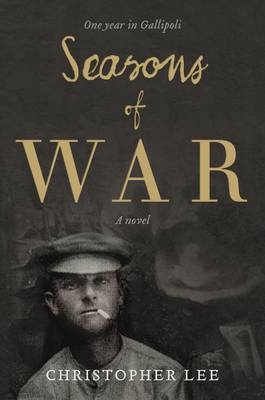