It is lovely to welcome Emma Young, author of The Last Bookshop, to Aussiereviews, to speak on her favourite bookish books. Over to you, Emma. 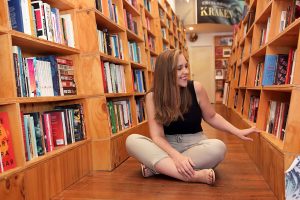 I was once a bookseller. At various shops across Perth, Western Australia, I covered and stickered and flyleaf-labelled titles destined for libraries, I bought and sold second-hand volumes, and I special-ordered non-fiction and technical books. Across the years I saw the challenges: the tight profit margins; the hard physical work; the need to be knowledgeable, continuously upbeat and helpful; the commercial headwinds forcing shops to pack up and move, or reinvent themselves repeatedly. I saw how at the heart of a bookshop’s success is the strength and sincerity of its connection to bookish people. I met so many such people, who asked me so many weird questions, and had such astonishingly varied interests, that of course it was not long before I began to think to myself, ‘This stuff would fill a book.’

I have finally written that ode to bookshop life: the difficulties and absurdities, but above all the joys of a business that’s about more than money. It’s called The Last Bookshop and it’s just been published by Fremantle Press.

Fun fact: my book mentions a grand total of 78 specific books by name. I know this because my editor, Armelle, made a list of them, for no doubt excellent editor-y reasons best known to herself.

But it’s not just my book that celebrates books, bookshops and writing. I come from a grand tradition of such stories. And since compiling this shortlist of my favourites, I see the influences they have had on my story, so I’m pleased to share my top five.

This gentle, charming story is a collection of real letters between outspoken New York writer Helene Hanff and antiquarian book dealer Frank Doel from Messrs Marks and Co, at 84 Charing Cross Road, London, beginning in the 1940s. What begins as a simple back-and-forth to fulfil Ms Hanff’s insatiable need for rare books blossoms into an epistolary friendship that spans decades. I can’t overstate how sweet, funny and touching this book is.

The 1987 movie adaptation is also good, starring Anne Bancroft and Anthony Hopkins: lovely escapism with a cup of tea on a wintry afternoon.

Helene Hanff’s account of her early days trying to make it as a writer in New York, employed as an apprentice playwright by the New York Theatre Guild, is equally enjoyable. It’s side-splittingly funny and utterly absorbing, a fascinating account that transports you effortlessly into her world.

If you loved Elizabeth Gilbert’s City of Girls, this is very like it – but the real thing. It’s most likely out of print, but I urge you to find a second-hand copy.

3. The Diary of a Bookseller, Shaun Bythell

Wigtown, Galloway, Scotland: officially designated Scotland’s National Book Town. The largest of the second-hand bookshops is The Bookshop, run by Shaun Bythell. His published diaries are caustic and bad-tempered. He is Black Books’ Bernard in the flesh, though a big heart is just visible beneath the misanthropy. A hilarious book – the sort you constantly read bits aloud from to your partner, though they wish you would shut up, because strangely they don’t love books about books as much as you. It’s cruel Bythell wrote this; he essentially stole the book I wanted to write.

If you need more when you’re done, he’s also written three more books in this vein.

Bookseller Laurent Letellier finds a handbag on a Paris street and commences a journey to find its owner. The best clue he has: a notebook inside, filled with scribbled notes that drive him mad with curiosity to locate the writer. A beguiling tale of a meeting of hearts and minds, this is a light and cosy read written with a delicate touch. It’s incredibly French.

Now that I think of it, this would be a nice Mother’s Day gift

A New York literary memoir, a coming-of-age tale and a fitting accompaniment to Underfoot in Show Business. Rakoff is another penniless wannabe writer new to the city, this time 1990s NYC. She takes a job as assistant to the literary agent of the reclusive J.D. Salinger, tasked with answering his fan mail. She’s supposed to send form letters, but – partly bored, partly touched – she begins writing back …

This is a nostalgic evocation of a pre-digital New York. I read it after a month’s stay there, which I highly recommend, but since that’s impossible right now, reading this is an excellent substitute. A big-screen adaptation has just been released starring Sigourney Weaver (though I just happened upon two scathing lines of review by the Guardian that I can’t unsee, so we’ll view at our own risk, shall we?).

Thanks for sharing Emma – I am off to add some titles to be wish list.  The Last Bookshop by Emma Young is available in all good bookstores and online.