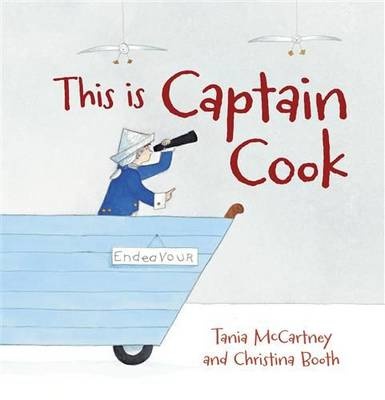 James was a very good sailor.
He could steer by the stars, make maps and read charts.
In fact, he was so good he joined the Royal Navy.

Englishman Captain James Cook played a big role in charting Australian and New Zealand coastlines, as well as exploring and having adventures around the globe. In This is Captain Cook, his story is told via a class play presented by Miss Batts’ class.

As Cook’s story is told in a simple, accessible narrative, illustrations show it being acted by students on a stage, in front of an audience of family members. Extra interest is added through speech bubbles and through side-stories happening with in the illustrations, such as escaped chickens running amok on stage, and interactions between audience members and the cast. The aforementioned chickens also feature on the end papers.

Useful for classroom study but also suitable for private reading, This is Captain Cook provides an entertaining introduction to the life of James Cook.