All I own in this world is my name: Lizzie Flynn. 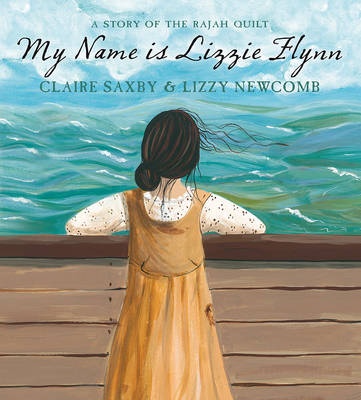 It’s all I take with me as we are hustled aboard the Rajah, a cargo of convict women.

Convict Lizzie Flynn is leaving London, bound for Van Diemen’s Land. All she owns is her name. When the women on the boat are given sewing materials to make a quilt, she is reluctant. She doesn’t know how to sew. But Molly encourages and teaches her, and soon Lizzie a part of the sewing group. By the time the boat reaches Australia, the women of the Rajah, have completed a beautiful quilt and Lizzie has new skills and new friends, though sadly her friend Molly has not survived the journey.

Saxby has a skill for creative nonfiction, and her text manages to convey both the emotions of Lizzie and her fellow travellers, and the essence of the era of convict transportation. The acrylic illustrations again capture the mood, with the drab colours onboard the ship in contrast with the e blues of the seas and sky beyond. In the scenes of land a clever contrast is created by portraying England in grey tones as the women leave it behind and Van Diemen’s Land (Tasmania) with rolling green hills, and gently colourful houses suggesting a level of hope.

A beautiful book, suitable for school and home

My Name is Lizzie Flynn: A Story of the Rajah Quilt, by Claire Saxby & Lizzy Newcomb
Walker Books, 2015
ISBN

Having been asked by the Revd Mr Johnson to jot down a few notes about my upbringing and the manner of my arrival in the colony, I will attempt to do so, but I should say at the outset that I have little of interest to relate. I have not contributed much of worth to the world, as will no doubt become obvious in the pages that follow, and indeed I sometimes wonder that I even survived the trials and tribulations of my earliest years.

So begins the story of Barnaby Fletch, a young convict recounting the tale of his childhood and early years in the colony of New South Wales. As would be expected, his protestations belie the absorbing story which follows. Fletch has been on his own on the streets of London for as along as he can rememberer, with no knowledge of his family. He relies on what he finds, or can steal, and shelters wherever he can, although his favourite place is within the walls of St Martin’s church.

A chance encounter with a returned convict makes Barnaby wonder whether transportation to the strange new land of which the stranger tells might provide an opportunity for a better life, so he decides to do what he can to get himself caught and transported. Eventually, though not without some difficulty, he finds himself bound for Botany Bay, and whatever that may hold.

South of Darkness is John Marsden’s first foray into writing for adults, though young adults readers may also enjoy this tale of hardship, survival and adventure set against the backdrop of colonial Australia and England and with a distinctly Dickensian feel. Fletch is an endearing narrator – surprisingly literate for his lack of formal education – and, while he does not give his age as narrator, the events of his childhood are told largely through the lens of childhood naivety, leaving readers to interpret and react.

There is the hint of a sequel in the final lines, and it is to be hoped that it will come, because readers are left wanting to know what is next in store for young Barnaby. Producing a tiny compendium, the girl stood, took out a Congreves match and struck it against the attached strip of sandpaper. The flame flared hugely, singeing her hair. Managing to swear roundly and light her pipe at the same time, she drew on it and coughed until her eyes watered. She coughed again, then hoicked and spat.
‘Beg pardon. I’m Friday Woolfe. And you should cheer up, because it could be worse…’

Harrie (Harriet) is a good girl in a desperate situation. Since her father’s death, she has been the sol income earner for her ill mother and younger siblings. In a moment of desperation she steals a bolt of cloth, planning to make clothing to begin her own business. But she’s no professional shop lifter, and she is caught, finding herself locked in Newgate Gaol awaiting trial. There she meets Friday, a worldy prostitute, who takes her under her wing. They are soon joined by thief Sarah Morgan and the naive young Rachel Winter.

Found guilty of their various crimes, the four soon find themselves aboard a convict transport ship bound for New South Wales. Their friendship grows, but it isn’t always enough to keep the girls safe from danger. Their are enemies amongst the other women on board, and there are male passengers and crew who also have the girls in their sights. When they finally arrive in Sydney they are sent toe grim Parramatta Female Factory where they await assignment, not knowing whether they will be able to look after each other any more.

Behind the Sun is a stunningly moving story of friendship and survival, bringing alive a colourful period of Australian history with an absorbing cast of characters. The key players – the four girls – are diverse, but share a common bond of wanting to survive and make their lives, and that of their friends, better. The enemies they make are well rendered, including the mysterious, powerful and vicious criminal Bella Jackson, and the sleazy Gabriel Keegan, with a vile taste for very young girls. Their other friends, too, are varied, including the ship’s doctor, fellow convicts and paying passengers.

The adventures – and misadventures – of these four young was they struggle to survive their time as convicts, is moving and, with the promise of three further titles to come in the series, readers will be keen to stay with them to see what their futures hold.

Convicts: hardened criminals, petty offenders, shiftless tramps, ordinary people? Ancestors to ignore, to defend, to hide, to boast about? A shameful past, or an interesting and novel one? A history to deny or sensationalise? One that had no effect on the present, or left an indelible stain?

Tasmania’s Convicts: How Felons Built a Free Society is, as the title would suggest, a nonfiction offering, exploring the role of convicts in the settlement and development of Hobart and all of Tasmania.

With 72 000 convicts transported to Van Diemen’s Land (now Tasmania) between 1803 and 1853, and approximately 74 percent of modern day Tasmanians descended from convicts, the contribution these often unwilling settlers made to shaping Tasmania is undeniable. Historian and author Dr Alison Alexander explores this contribution, peppering her text with anecdotes and examples of the convicts, the lives they left behind, and their new lives in the colony.

For anyone with an interest in Australian history, this is a very accessible offering.

This book can be purchased online from Fishpond, Buying through this link supports Aussiereviews.

It’s 1875 and you’re the son of a farm labourer in England…You hear there is plenty of work available in the new factories opening up in London, so you move there in search of a better life. You have no idea that in a few months’ time, this move will eventually take you to the other end of the earth.

Avoid Being a Convict Sent to Australia is a wonderful nonfiction offering which will appeal to primary aged children. What sets it apart from other books about convicts is that it speaks directly to the child, using the second person ‘you’. As you read the book, the things that happened to the convicts are now happening to you. You are arrested, imprisoned and sent to Australia, where your new life as a convict is pretty hard. The reader is subjected to all sorts of hardships, with the second person narration making it personal.

The use of bright cartoon-style drawings and other humorous elements such as handy hints (for example, convicts are told to hope that the King is in a good mood on the day of your trial!) make the book fun to read at the same time as being informative, with plenty of facts and examples, a back of book glossary and more.

This is an excellent educational offering, suitable for home or school.

The Danger Zone: Avoid Being a Convict Sent to Australia, by Meredith Costain, illustrated by David Antram
Koala Books, 2005

This book is available online at Fishpond.