Can you see her?
There – deep in the stretching shadows – a dingo.
Her pointed ears twitch.
Her tawny eyes flash in the low-slung sun.

It is dusk, and Dingo is awake, ready to hunt to feed her cubs. As she moves through the landscape, the reader learns about this dingo and, through her, the dingo species.

Dingo, part of the Nature Storybooks series from Walker Books, is a sumptuous picture book offering. The text is lyrical, pacing across the pages like Dingo paces across the landscape. The illustrations, in layered oil paintings, are rich and wild, matching the subject matter perfectly. Short factoids on each spread, in a different font, give the reader further detail about the species.

Perfect for young animal lovers to enjoy on their own, Dingo will also be a valuable classroom and library addition. Wombat stared in surprise at the other animals.
Am I special after all?

When Wombat emerges from his tunnel, his friends are really glad to see him, but as Wombat watches them celebrate he feels sad. Each of his friends is good at something: Goanna is the fastest climber, Magpie is the best singer and Dingo is the cleverest dancer. Wombat wants to go back and hide in his tunnel, but his friends run after him to remind him that he, too, is good at things, and best of all, that Wombat is their friend.

A Feast for Wombat is a gentle tale of friendship and self belief. While Wombat wants to be like his friends, he seems unaware that each of them is different, as is he. His friends’ reminder of his own strengths is reassuring, and will reassure young readers, too.

The acrylic illustrations bring the cast of Australian animals to life in gentle bush colours with lovely textured backgrounds, adding to the warm feel of the book. 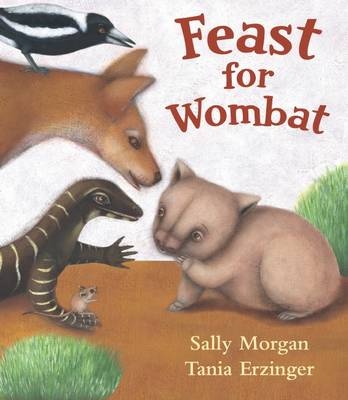 One fine day, on the banks of a billabong, a very clever dingo caught a wombat…
and decided to make…
Wombat stew,
Wombat stew,
Gooey, brewy,
Yummy, chewy,
Wombat stew!

Of course the poor Wombat isn’t very keen to be made into stew, but his clever friends have a sneaky way to help outwit Dingo. Each friend tells Dingo he is missing an essential ingredient for his stew, so soon Dingo is adding mud, feathers, flies, bugs and more. But, when he tastes the stew, he thinks he’s been poisoned and hurries away leaving Wombat and his friends celebrating.

This classic Australian picture book was first launched twenty one years ago and, to celebrate, has just been re-released by Scholastic Australia. The rhythmic text and the repetition of the ‘Wombat Stew’ chant make it very appealing to young readers, who will join in on the first or second read. Pamela Lofts’ illustrations are a delight, with amusing yet somehow lifelike Australian animals peppering the pages. Even the mean Dingo is cute and dopey rather than scarey.