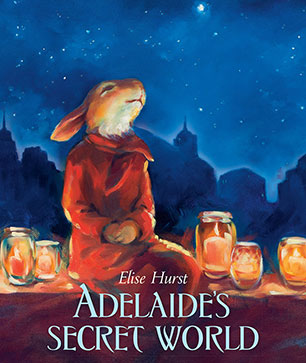 By day she would look out for the still ones, the quiet ones, those who danced and sighed and dreamed alone.
And at home, her head full of their stories, Adelaide would work into the night, taking a little bit of the world and making it her own.
But there was always something missing.

Adelaide lives alone in a shop that was once bustling and lively. She observes the world around her, and in particular the lonely people who inhabit it. She makes art from what she sees, but her quiet life is missing something. An unexpected encounter with Fox, who she has observed, but who has also been observing her, leads her to put herself outside her comfort zone, transforming not just her own world, but the lives of the other lonely people around her.

Adelaide’s Secret World is a magical, richly wrought picture book. Rabbit Adelaide lives in a world inhabited both by humans and by a wonderful array of animal characters. Readers of all ages will enjoy discovering the fantastical elements – flying fish, a boat sailing through the sky, a bear and a goose sheltering together under a tree, a lion dancing with a human, and much more.

The story is gentle and minimal, so that readers can interpret and ponder during – and long after – reading. The art is simply divine, again with much to ponder.

Suitable for all ages.

Fish that fly through the sky , gargoyles that come alive and drink cups of tea, and cats that play chess are just a few of the wonders that populate the pages of this fantastical, magical yet gentle book. The poetic text is minimal – just a few words per page – and invites readers to use their imagination. The illustrations, in black pen and ink on cream backgrounds use light and shadow, and lots of cross-hatching and detail, to amazing effect. There is a historic feel, with steam trains, historical figures and buildings and of course the lack of colour all enhancing this, but it doesn’t feel dated. Rather, it seems the children pictured are in a time slip adventure, taking the reader with them.

The design of the book is also special. In clothbound hard cover, with embossed text and a panel print illustration, the endpapers also use red ink rather than the black of the rest of the book. The whole feels sumptuous and a real keepsake.

Imagine a City would make a perfect gift for a child or an adult.

When Sarindi finds his very own lucky marble in the seed-bin at the bird market, he thinks he will never be unlucky again. And for a time, it really does seem as though he has luck in his pocket, because he wins the lucky gold-streaked marble of his best friend Jaya – and a whole other pocketful of marbles besides. It seems as though Sarindi cannot lose at marbles now he has Jaya’s lucky marble, and he thinks he is the luckiest boy in the world.

Sarindi is convinced that luck keeps his world, the world of his family, turning right. His mother says that their luck is due to hard work and good thinking. But when his mother falls ill, Sarindi is sure that luck has deserted him. He tries all manner of things to change the family’s luck and to make his mother well, but nothing seems to be working. He visits many places of worship and prays in them all. His last stop is a Buddhist temple and there at last it seems his luck may have returned.

Sarindi and the Lucky Buddha is set in Indonesia. Though their possessions are few, they consider themselves wealthy. His father works hard pedalling a becak each day for tourists. Sarindi is convinced that luck can be managed and that it is luck that controls their fortunes. His mother is more sceptical and more inclined to be practical. It is his mother who is central to their lives. She fixed the becak so his father can ride it. She made it look like new so all want to ride in it. So when his mother is ill, Sarindi is very concerned. But unlike many children of his age, Sarindi takes a very active role in trying to make sure she gets well again. Sarindi and the Lucky Buddha is a story of love and luck. Recommended for 7-9 year-olds.

He looked around. It was a mess. This was supposed to be a shared bedroom. Misha had one side of the room and Paul had the other. But wherever he looked all he could see was Misha’s junk.
Misha’s clothes, Misha’s toys, Misha’s books, Misha’s everything. Paul couldn’t even see the floor anymore.

Paul has had enough of sharing a room with Misha. There are no spare rooms in the house, but when Paul looks out at the treehouse in the back yard, he has an idea. Maybe Misha can move out there. All it will take is a little work.

Soon, though, Misha gets involved. If Paul is going to build her a treehouse, she is going to have some say in what it’s like. Paul isn’t sure about Misha helping, but soon he is surprised at just what she can contribute.

Misha’s Treehouse, part of Lothian’s Start-Ups series, is a gentle first novel, or chapter book, about sibling relationships and working together. Whilst solving the problem of a need for separate space, the young pair find common ground and a strengthened relationship.

This is an appealing story – kids will enjoy the novelty of the treehouse, and not find the message about working together overbearing. Good stuff.

Who said power was for pussycats?

This is title 20 in the ‘It’s True!’ series. Carol Jones introduces warrior women through history. From Ancient Greece to not-so-long-ago Russia, it races through the lives of some amazing and influential women. There are tales of Amazon women warriors who trained their daughters to fight and banished their sons. Read about an Irish goddess who could kill with the power of her battle cry. These powerful women used traditional battle strength as well as a plethora of other skills to achieve their aims.

This is an entertaining look at powerful women in the distant and not so distant past. It tells of their ambition, greed, legacies, strengths and weaknesses. As well as more familiar characters, the author has sourced lesser-known (outside their countries) warrior women from all over the world. There is detail enough to guide the reader who wants to know more. Text boxes and Elise Hurst’s illustrations add to the reading experience.