Annie has never been the sort of person to have nightmares. But since the fires on the mountain, her dreams have changed. They have developed a pattern, as though the fire changed the landscape of everything inside her. The ridges and curves.
Her dreams are steady, the same things flickering across each night. Ash and bubbles and dark water that movs like waves.
Since the fires, since leaving her nana on the mountain, Annie has dreamt of ash. She’s dreamt of drowning.

A year ago, Annie was visiting her grandmother up the mountain when a terrible fire ripped through the area. Since leaving her nana behind to die, Annie has tried to keep her life in the city from completely falling apart. But her daughter, Pip, is traumatised, her husband Tom is angry, and Annie herself is haunted by what happened. Now, she needs to go back to her childhood home to try to get her mother’s life back on track. But being there also means confronting her own demons, and helping Pip find equilibrium.

Ache is a moving story of survival and rebuilding in the face of adversity. A whole family, and a whole community, have been impacted by the fire, and Jones captures the range of emotions and experiences which might be expected from such an event as well as examining the ways survivors can find a new normal in order to move forward.

I began as a tiny spark

all alone in the dry grass.

The wind whistled and gently picked me up.

I began as a tiny spark

all alone in the dry grass.

The wind whistled and gently picked me up.

Spark is the story of a wild fire, told from the perspective of elemental fire. It begins as a spark, and in answer to a question from the wind, the two begin to play. The ‘play’ escalates as the fire and wind race across the land until the fire acknowledges the destruction and wants to end the game. The wind continues until together, they turn on their path and witness the cost of the play. Illustrations are painted and progress from summer sunny through bright flame to black and greys to finish with the tiniest glimmer of colour. Text is hand-drawn by illustrator Andrew Plant. Image frames grow with the intensity of the fire and retreat as it does. Image frames set in smoky pages.

Spark is the story of the consequences of a single careless incident. There’s a sense of menace from the front cover on, hands-over-the-eyes please-don’t-let-this-happen inevitability. What starts small quickly builds out of control, with no time to see the damage. Bit like bullying really. Suggested reading age is pre-school but it will have applications well beyond preschool, particularly in the classroom. Illustrations provide the opportunity to search out beetles, ants and larger animals as fire chases all before it. Recommended for early primary and for inclusion in discussions about both fire and bullying.

A fire starts small but quickly grows, spreading across the landscape, lighting up the trees, the sky – and even houses. People flee as fire fighters battle to bring the monster under control. Afterwards, there is sorrow at the devastation, but there is also hope, as comfort is spread by friends and by strangers, and by signs of life returning.

Fire is a wonderful picture book collaboration form the team which also produced Flood. Jackie French and Bruce Whatley. The rhyming text seems to echo the actions of the fire, taking the reader n a breathless journey through the smoke and ash and beyond to the gradual restoration of calm. The illustrations capture the mood of the fire, as well as the contrasting landscape before and after.

A wonderful way to open up discussion about the impact of bushfire, both for those who have experienced it and those who haven’t. 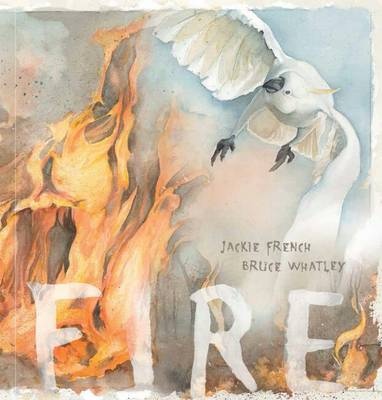