An hour before the biggest gig of our career, we sent a roadie on stage and instructed him to stretch a silver line of gaffer tape down the centre of it.
Rose and I watched from the wings.
‘That’s my side,’ she said pointing to the left, which was always her side. ‘Do not come over that line.’
Less than forty-five minutes after that I tried to strangle her in the people mover. Then I strapped on my guitar and walked out into the lights.

Nina Dall is one half of teen band The Dolls. The other half is her cousin Nina. They’ve grown up idolising their Aunt Alannah, and now they are determined to emulate her successes. But along the way, it seems they are also bent on copying a lot of her less stellar moments too – with alcohol, drugs, sex and family feuds all making big bumps on the road to success.

Cherry Bomb offers an uncomfortable, yet intriguing glimpse at the workings of the music industry, with extracts from Alannah’s autobiography at the start of each chapter highlighting similarities and differences with the past. Nina Dall is not a terribly endearing character, but she is honest and witty, and her insecurities, issues and childhood history of abuse draws the reader in as she lurches from crisis to crisis.

Likely to most appeal to older teens and under thirties, as well as anyone with an interest in the music industry. 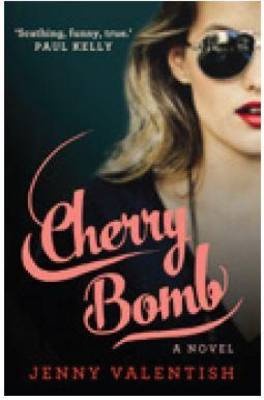