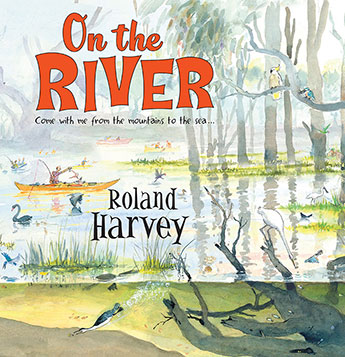 Here in the foothills, tadpoles practise to be grown-up frogs in crystal-clear ponds, surrounded by wiry grasses and tough little plants that have spent the winter sleeping under the snow….These are the headwaters of the Murray River, where the story begins.

From its small beginnings high in the Australian alps to its meeting with the sea, the Murray River’s beauty is legendary. But, though it is home to a vast range of wildlife, including fish, birds, frogs and insects, it has also played a major role in Australia’s farming, transport and industrial history and, as such, its delicate balance has been impacted.

In On the River, author/illustrator Roland Harvey travels the length of the river in words and pictures, with his pelican friend, exploring the beauty of the river, as well as its history, its role in the lives of both the natural and human world, and its struggles.

Populating beautifully rendered realistic landscapes and aerial views with the slightly cartoonish human figures which Harvey is known for, the book mixes whimsy with serious subject matter, highlighting the plight of the river as well as the things it is loved for, including recreation and its beauty.

Useful for classroom purposes, On the River is also great for private enjoyment. 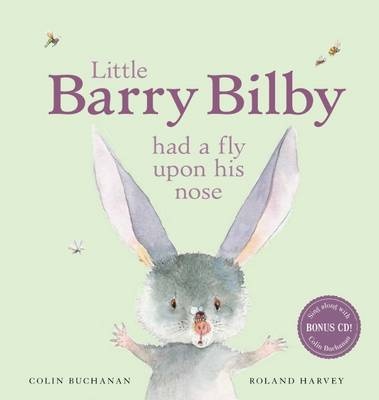 Little Barry Bilby had a fly upon his nose…
Little Peter Possum had a mozzie on his ear…
Little Colly Cocky had a beetle on his beak…
And the bizzy buzzy bush bugs won’t go away!

This humorous picture book is filled with favourite Aussie animals – bilby, echidna, wombat, dingo and more – all afflicted by annoying bush bugs, from flies and mozzies to cicadas and even a bogong moth. The best solution is to tumble down the gully and jump in the creek. The repetitive text encourages children to join in, and can be either read or sung, with an accompanying CD coming in handy for the latter.

The illustrations are in gentle bush pastel tones with lovable animals and insects, with zany touches such as the slightly cross-eyed look of Barry Bilby.

Suitable for children from birth through to primary school age, Little Barry Bilby Had a Fly Upon His Nose is lots of fun.

Colin Buchanan & Greg Champion have been creating Australian Christmas songs for many years, delighting Aussie youngsters and their teachers and parents with their humour and the catchiness of their tunes. We Wish You a Ripper Christmas continues that tradition, taking the chorus of an earlier offering (included in Fair Dinkum Aussie Christmas) and telling the story of Santa WOmbat losing his naughty and nice list and needing some help from the other Aussie animals to find it in time to deliver the presents.

Set to the tune of We Wish You a Merry Christmas, the song is easy to sing, and children will join in on the chorus even on a first read. The story is humours, and is brought to life in detailed water colour illustrations by the amazing Roland Harvey. And, of course, the book is accompanied by a CD recording of the song, complete with karaoke track so that kids can sing it for themselves, either for performance or for fun. Kids love Christmas, but many children don’t know a lot about the traditions behind the celebration of Christmas. In this child-friendly book, Roland Harvey explores the origins of the Christmas feast, from the story of the first Christmas, to the selection of the date and more, before exploring the different ways that Christmas is celebrated around the world. There are traditional and more modern recipes from each region, for children to test out.

In the second part of the book, there are a wide range of Christmas activities for kids to try out – including making simple gifts and decorations and games to play on and around Christmas. There are also the words and musical notation for a range of Christmas songs, and the bonus of a sheet of gift tags.

This informative number would be a great offering in the lead up to Christmas, and would also be a wonderful classroom tool for exploring Christmas traditions.

This book can be purchased from Fishpond. Buying through this link supports Aussiereviews.

Every afternoon after school, Bonnie and Sam took Tricky down to Currawong Creek and practised their trick riding. Bonnie was the star now, and she loved it. Usually Sam was the best at riding.

Bonnie and Sam love horses, even though neither has a horse of her own. Instead, they visit and care for the horses of the residents of Currawong Creek. When the local Fire Brigade runs a talent night, Bonnie and Sam borrow a pony and decide to learn some trick riding. The only problem is that no one has told them no animal acts are allowed.

When a circus comes to town, though, the girls find some consolation. There is a trick riding act in the circus. Maybe they can learn some new tricks from the girl who rides in the circus.

The Circus Pony is the second title in the very cute Bony and Sam series from the talented pairing of author Alison Lester and illustrator Roland Harvey. Perfect for horse mad youngsters, the stories are aged at readers aged 7 to 9. There are full colour illustrations on most pages and a cast of lovable characters, both equine and human.

This book can be purchased from Fishpond. Buying through this link supports Aussiereviews.

Everywhere Shadow looked, she saw danger. The other wild horses trotted happily through the moonlit bush, but Shadow was afraid.
Shadow had been born on a farm where she felt safe and secure. Then one day her mother pushed open a broken gate and took Shadow into the mountains, following the call of the brumbies. From then on, Shadow was always tense and worried.

Bonnie and Sam are best friends who share a mutual love of horses. Though neither has a horse of her own, they befriend all the local horses, and ride them whenever they can. When Sam’s dad, Bill, is given a horse to use for police work, Sam and Bonnie are excited, but the new horse, Drover, doesn’t let them ride her.

One night, the brumbies visit the town. Shadow, a brumby who looks just like Drover, jumps the fence into Drover’s paddock – and Drover jumps out and flees with the brumbies. The girls like the new Drover better than the old, but will she be able help Bill with the police work?

The Shadow Brumby is the first in a new chapter book series, Bonnie & Sam, for horse mad youngsters. With plenty of horsey action, and full colour illustrations by Roland Harvey, the series is sure to appeal to girls aged 7 to 10, and perhaps a little older.

Dear Grandma, Crabby Spit is COOL!
We have the best camping spot near the toilets and the beach and the river. Mum has agreed to stop embarrassing us and only wear her new hat in the tent if we do all the cooking for the whole holiday.

When Penny, Henry and Frankie go to Crabby Spit with their parents for a holiday, Grandma stays home. But she doesn’t miss out, because the children write her a postcard every day, telling her about all the fun and excitement of their holiday.

At the Beach tells the story of this holiday through these postcards, a format which young readers will love. The intricate illustrations of Roland Harvey will also intrigue and delight.

Harvey uses dip pen and watercolour to blend cartoon elements with the landscapes of the beach, caravan park and townsite of Crabby Spit. He also adds an extra dimension by ‘losing’ his own holiday gear throughout the pages of the book – and challenging readers to find them.

This hard cover offering is suitable for readers up to the age of about eight years and would also be a useful tool in the language and creative writing classroom.

At the Beach: Postcards from Crabby Spit, by Roland Harvey
Allen & Unwin, 2004