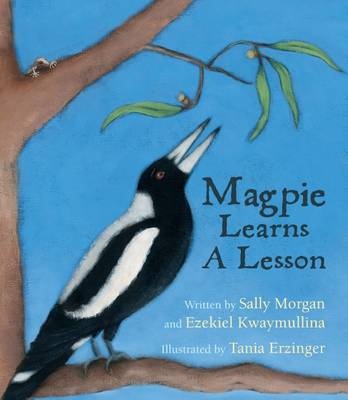 He could soar to great heights.
He could drop from the sky like a stone.
He could see over a long distance.
Magpie decided to play a trick on him.

Magpie can sing beautifully, but she is jealous of her gentle, kind friend Brown Falcon, for his hunting and flying skills. So she plays a series of mean tricks on him to make him look silly. AT first Falcon tries not to mind, but eventually he gets cross and flies away. When Magpie gets caught in a hunter’s nest she realises, almost too late, the value of Falcon’s friendship.

Magpie Learns a Lesson is a charming lesson about friendship and, in a story with echoes of The Boy Who Cried Wolf, the importance of being honest. The story is brought to life in beautiful acrylic paintings, with the oil sketch paper adding . texture. Rich blue skies alternate with creamy backgrounds and eucalypt greens for the ground and tress scenes, giving a generous echoes of the Australian bush.

This is what I do every morning.
Lock the bathroom door. Turn on the shower. Take off my clothes. Wet my hand. Run it through my hair. Turn off the shower. Come out with a towel wrapped around my waist.

When Jack discovers that pretending to have a shower gets him out of having to have one, he decides to use his one rule – do it badly – to get out of just about everything. But Mum seems to have a solution to everything: when he breaks the broom, she gets him to sweep with a dustpan and brush, when the mophead ‘disappears’, she suggests a toothbrush; and when it’s time to wash the dog, Jack’s really in for a smelly surprise. Maybe Mum is onto his tricks.

One Rule for Jack is a funny chapter book for newly confident or emerging readers. The text is accessible and humorous, and there is illustrative support in the form of grey-scale illustrations by Craig Smith.

Any child who has tried – and failed – to trick their parents will enjoy themselves in this book.